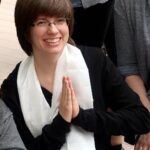 Hi there! I'm Cassie, the Reviews Editor here at Yogi…

the ecstatic teachings of victor colletti

a look at the woman behind the camera

A French-American photographer with Greek, Russian, and Romanian origin on her dad’s side and French and Italian on her mum’s side, Stephanie Cornfield shares her time between Asia, Europe, and the United States. Navigating between Paris, London, and New York, she took pictures of the underground nightlife for various magazines.

She then became a staff photographer for a famous rock magazine in Paris, and portraits became her signature as she encountered memorable characters like Iggy Pop who had a lot of influence on her and her art. Stephanie definitely caught the photographer’s virus! She is still touring the world, but her elective place, the place she calls her home now, is India.

Stephanie became known as a photographer to the stars, but she is also a star photographer in her own right. She has just signed a five-year contract with the prestigious Fellini Foundation based in Switzerland, and has an international exhibition, ‘Nomadic Mirrors,’ which is supported by the Fellini Foundation and is on display in their museum.

Her work has also been featured in another exhibition, called “Vagabond Souls”  in Percept Art one of the most prestigious galleries in Bombay. In 2011, Stephanie Cornfield was the Venice Movie Star winner for her portrait of Chinese actor Andy Lau and was selected as one of the best photographers by the Cannes International Film Festival in 2014 in the section L’oeil du Photographe, or Behind the Lens.

Stephanie is currently working with various international publications. She has a continuous collaboration with the Los Angeles Times but is continuing to build her repertoire, publishing her work also in Vogue, The Guardian, The Bund, El Pais, Le Soir, Der Tagesspiegel, Le Monde, and Elle, to name a few.

In Mumbai, she has collaborated with leaders of Indian Independent Cinema such as Anurag Kayshap and Ashim Ahluwalia and has taken portraits of Anushka Sharma, Ranbir Kapoor, Priyanka Chopra, Ranveer Singh, Raveena Tandon, and a few others.

Intrigued by the woman, the photographer, the vagabond, we chatted with her over a chai tea to capture her thoughts.

Yogi Times: Stephanie, you come from a background of cinematographs. Can you tell us more about that?

Stephanie Cornfield: I guess I have Hollywood cinema in my DNA. My father, Hubert Cornfield, was known for his movies with Poitier and Brando, and my grandfather was president of 20th Century Fox in Europe and the Middle East. Naturally, in cinema, I found my first love, one that resulted in photographic gems of greats such as Jack Nicholson, David Lynch, Kirk Douglas, Sofia Coppola, Colin Firth, Kevin Bacon, Andy Lau, Fatih Akin, Larry Clark, Dino Risi, Tsui Hark, Amanda Plummer, and Claudia Cardinale, amongst others.

YT: You grew up mainly in France and have traveled extensively for your work, but these days you are now based mainly in India. What drew you to India, and how long have you been living there?

Stephanie Cornfield: I really like challenges and being out of my comfort zone. I’m a “Don’t try just do it!” kind of woman. I first came to India as a visitor five years ago and felt a strong sensorial attraction. The special light, the particular sound, either just walking in the street or in my trips doing documentary photography, hearing trance sounds, and being in the Kumbha Mela felt magical. I developed a strong love for Indian classical music.

I attended a music festival with the master of tabla Zachir Hussain and it blew my mind, the beauty of people is so inspiring. People look at you and you feel the life, the total craziness happening there and I can relate to that. I feel Indian (smiling).

India is my home yet it’s tough, it’s draining at times. You have to think ahead twice in a place like this and you need to stay present to really achieve things. That’s my weakness as I have a gypsy life, very Nomadic. I’m a vagabond. My last two exhibitions were named “Nomadic Mirrors” and “Vagabond Souls”.

YT: How do you maintain equilibrium when you are always on the road at film festivals or on shoots?

Stephanie Cornfield: Sports were always been an integral part of my life. It gave me a core; I stay strong no matter what. I started at a young age doing cross country competitions, and it gave me a tenacity, a combination of pleasure and pain that always serves in my life, breathing being the master key, as well as facing life, generally speaking. To control your body and your mind, to be in charge… My big passion then was bodyboarding. Surfing the waves first in the Atlantic Ocean, I had my family house near Biarritz. I grew up fascinated by the waves, the bigger the better.

A healthy and wholesome cuisine even when I travel has also been my savior over the years to maintain a well-balanced life. Shoots are often long hours, heavy cameras, and junk food being served, so I take extra care to plan ahead and maintain clean nutrition.

I enjoy the most being in connection with nature, either being on my board on the ocean or else skiing. I have a particular love for the soothing silence in the mountain, so peaceful. I spent weeks alone reading in a chalet up in the mountain and skiing during the day.

YT: You mentioned that eating healthy and wholesome cuisine is essential for living a balanced life. Can you tell us a little bit more about what your diet is like while you’re on the road?

Stephanie Cornfield: I carry nuts with me as a healthy snack, or I prep in advance some peeled apples or pineapple slices that I deep in masala salt. Sometimes Pomegranate with pepper. I like to eat boiled eggs in a Turkish style with a bit of olive oil, fresh lemon juice, chili, paprika, salt, and pepper. Otherwise, I prepare a smoothie with all the fruits I have and some fresh ginger. My usual menu is steamed vegetables cooked with chili and ginger, then I add fresh parsley and black olives. I don’t eat too much meat in India, though I grill fish once in a while.

YT: Bali is a regular destination for you. Do you go for work or pleasure?

Stephanie Cornfield: I took my first surf trip to Bali in 1991. I was young and Bali was so different than any other place I had been. My favorite surfing spot was Bingin. I remember dancing with Balinese girls at the special full moon celebration with the traditional musical instrument gamelan, there were only locals and surfers at that time. It was a photographer’s paradise with a crowd of artists and eccentric people from all over the world.

YT: How did you fall in love with photography, and when did you know that you wanted to be a photographer?

Stephanie Cornfield: Photography came by accident. I wanted to be a war reporter, I was studying political science. I had a boyfriend back then who was a war reporter for CBS News. Being with him I saw closely what it was in reality. I thought then that I was not strong enough psychologically to do it. More and more I was attracted to art, and I was supposed to go to a film school in L.A., but some dramatic events in my life changed the course of this destiny. I was doing a bit of photography, attended a few classes at the Parsons School of Design, and I thought why not I can start tomorrow.

I was first a nightlife photographer covering Paris, London, and New York nightlife, more the underground scene for magazines. Then I became the staff photographer for a famous Rock magazine in Paris called Best. That’s where I learned my craft as a portraitist. I was talking exclusively portraits of rock bands, rarely live shots. I liked to create my own atmosphere! It’s now more than 10 years that I work in the movies.

YT: You come from the “old school” of shooting on real film. What camera are you currently using?

Stephanie Cornfield: I started to work as a photographer shooting on real film. It was really exciting to be in the darkroom developing your own films and prints and experimenting. I had a particular love for infra-red film. My father offered me my first camera. It was a Nikon called Nikkormat. Heavy camera, I loved the feeling of it, the sound of the click. Now I’m shooting with a digital camera, a D800, faithful to Nikon, and hoping to acquire a new body of camera within the year. I’m shooting sometimes with a panoramic camera too, Noblex. I’m always thinking of different ways of lighting a shoot.

I like to mix lights, to have a combination of cold and warm lights. I enjoy the most shooting in low light, creating an atmospheric environment. From an early age, I felt challenged by color, motion, trends, and especially faces. I see portraits as landscapes and treat them like paintings, and I like to work on the texture. People say of my pictures that they are very cinematic, dreamy and they capture the mystery of the moment.

YT: What is it about the film that inspires you and your work?

Stephanie Cornfield: I guess when you’re very influenced by film, it helps you see life from a different perspective. You have more distance as you perceive reality with cinematic eyes, more dreamy eyes maybe.

Some filmmakers who inspire me a lot: Mikhail Kalatozov for Soy Cuba, Wong Kar Wai, Barbara Loden for Wanda, Monte Hellman for Two-Lane Black Top, Orson Welles, Jean Renoir, Scorsese, Kubrick, Aki Kaurismaki, Fellini, Visconti, Kim Ki Duck, Jean Luc Godard for The Contempt, Tony Gatlif for Latcho Drom. My dad inspired me also, as he was a great director and transported you in another dimension.

Working in the movies, whenever I take a portrait I try to tell a story instinctively, to make the picture cinematic as well as when I’m doing documentary pictures. I like to depict reality while transforming it. You can think of your frame like a painting, then think of texture, colors, or a particular shade of black and white.

YT: What are some of the challenges that you’ve faced while working to make a name for yourself as a photographer, and how did you overcome them?

Stephanie Cornfield: When you start, sometimes you face situations where you’re all alone with no assistant, and you have to be able to improvise, you have to be imaginative! It’s tough mentally and physically. You prepare yourself like a soldier, especially being on a film set, but also working in a big film festival like Cannes.
You have to make journalists, publicists, and editors trust you and you have to overcome all sorts of obstacles. I can’t go into detail but it can be intense.

YT: Do you have any advice for our readers who are currently pursuing their dream job and, like you have done, manifest their passions into a career?

Stephanie Cornfield: My motto: don’t try, just do it!  Be tenacious. You have to be a go-getter. Also, unless you’re a genius, you still have to expose yourself, sell yourself. You should be able to knock on doors, and give a lot of cold calls!

the ecstatic teachings of victor colletti