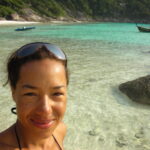 Sunny is a multi-talented artist with a love of nature,…

A new wave rolls into the Caribbean…

Mother Nature has a wicked sense of humor. She signs the same name on destruction and disaster that she does on the sweet scent of night blooming jasmine and the taste of wild honey. In 1989, her wrath was evident as Hurricane Hugo hit the U.S. Virgin Islands with reckless abandon. Most affected by the storm was the 28-mile long island of St. Croix. Once home to the Arawak indigenous tribe, the hilly island rises up from the crystal blue as a verdant retreat in an expansive sea.

A cluster of dense, dark thunderstorms moved off the coast of Africa, steadily intensifying, until they became a massive storm system that left 90% of St. Croix’s structures, including hospitals, banks, and the airport, severely damaged; phone lines and powers lines went down, creating instability. Looting and lawlessness were tempered by a military, police imposed dusk-to-dawn curfew. By the time it had passed, Hugo had caused more than $5 billion in damages to the Caribbean islands.

St. Croix has struggled to regain its economic posture ever since Hugo blew through. Its residents still refer to the flourishing times “before” and since the devastating tempest. As a territory of the United States, the relationship resembles that of sentry and orphan, where the absence of an attentive parent has meant that funds for restoration projects have mysteriously vanished.

In the twin cities of Christianstead and Frederickstead the crumbling remnants of colorful, colonial buildings stand as ghostly reminders of a bustling past. Twisted roots and hanging vines encroach upon the most neglected structures. To this day there remains a listless quality on the streets of St Croix.

But Mother Nature is also a provider; opportunity and possibility lie just on the other side of tragedy. Like seeds of potential, a new energy is sprouting on St Croix, opening the doorway to fresh ideas and innovation, bringing strength and a sense of hope as it winds it’s way through the community.

The recent return of tourists via cruise liner excursions, is offering shop owners a chance to regain their stature. Streets that only a few years ago were silent reminders of nature’s indiscriminate fury, now boast of their daily foot traffic.

People like Cheryl Wade and Jonathan Lowis are ushering in this new vision as well. In early 2007, they opened the Kalima Center in downtown Christiansted. Wade, a PhD and self-proclaimed “former-workaholic” suffered an accident in 1998 that left her with three broken ribs. “Why don’t I give myself a break?” she asked herself, sensing imbalance in her life. She decided to take time for self-reflection and began exploring religion. Through Buddhism and Hinduism, she discovered the Goddess Kali; creator and destroyer, and was inspired to open the center. Offering fresh juices, raw food, and yoga classes, the center aims at assisting individuals in developing their own practice of holistic living.

Contributing to the fresh energy in Christiansted is the family owned, Riddims Music. Selam Desta and Laurent “Tippy” Alfred opened their music shop as an outlet for local artists and to promote Caribbean culture. “A lot of Jamaican reggae right now is not as conscious as it could be”¦music from St. Croix is rich, ” says Selam, while keeping one eye on her sleeping baby. “We keep everything positive and good vibes” she says, as a dub base line bumps in the background. Although the shop is humble in size their customers are satiated by the wide selection of hip-hop, soca, reggae, gospel, and carnival music available. Along with music the family business offers Rasta gear, incense, and friendly vibrations.

The innovation continues as educational programs aimed at children, pave the way for an empowered new generation of Cruzans. Environmental awareness is at the forefront of this movement, which includes an island wide campaign to reduce the use of plastic bags and efforts focused on coral reef protection and preservation. The West Indies Marine Animal Research & Conservation Service offers field trips to local schools where, under the cloak of the night sky, students are invited to observe the nesting rituals of leatherback turtles. Children giggle and gasp as newborn leatherbacks instinctively push towards the sea. The field trips instill a respect and admiration for the endangered species.

Not far from the nesting ground is a place where rebirth and second chances are a common occurrence. Located on St. Croix’s west coast in the town of Fredericksted and identifying itself as “a catalyst for change in a community that is at risk, threatened by despair,” Ten Thousand Helpers of St. Croix has introduced hope to the homeless. Judy Bain, the organizations CEO and Program Director President, believes that creativity opens the mind and speaks to the soul of the individual. Working with The Virgin Islands Sustainable Farm Institute, Ten Thousand Helpers collaborates in a community outreach “incubator” program where local people are able to learn farming techniques and in exchange, return a percentage of their sales to the Institute.

“We’re about breaking down walls, building bridges and bringing people together,” says Nate Olive, Program Director and hiking enthusiast. Director Ben Jones, “a sixth generation hillbilly,” hailing from Georgia, established the Institute with the vision of a “network of…farms in different biological regions around the world” working together to help educate communities in sustainable agriculture techniques. Nestled within the valley of the hundred-acre property surrounded by tropical splendor the farm sits like a flower offering its nectar to the local population.

As seasons pass on St. Croix, Mother Nature distributes her offerings with rhythmic flow. Pristine waters and azure skies provide the backdrop for a community on the move toward empowerment. Newfound ideas take root as holistic wellness, environmentalism and global awareness begin to bloom. From positive music to the investment of resources into youth and education, St Croix has emerged from the rubble of Hurricane Hugo, triumphant in its resolve and fresh in its inspiration.