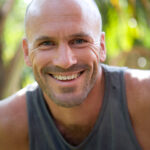 relationship between gravity, spine, and breath

The ancient yogis realized that the physical body was the most appropriate ‘start point’ for a consideration of wellbeing, since it was tangible; and indeed, due to the law of karma, affecting the body would in any case effect change in the mind and the emotions – the body is like the cauldron of transformation

Hatha yoga is a branch of Raja yoga, and though both are focusing on reaching the state of meditative absorption, hatha yoga doesn’t consider the full realm of human lifestyle, and is only concerned with increasing the vital energy (prana) by aligning our physical and subtle bodies – harmonizing body, breath and senses.

Hatha (from the tantric tradition) therefore emphasizes the energy body as a primary route to realization – ha means sun nadi and tha means moon nadi and the practice is about the balancing or unifying of these opposite energies.

The practice of hatha yoga is built up around seven steps: satkarma, asana, pranayama, mudra, pratyahara, dhyana and samadhi – almost identical to patanjali’s eight-limbs of astanga yoga, but most of the yamas and niyamas are left out.

The asana aspect of hatha yoga has become the main concern of modern yoga in the west, and normally involves a sequence of postures which are designed to enliven and ease the various parts of the body, calm the nervous system, and prepare the practitioner for being still – a state of mental and physical relaxation –  which is the purpose of all of yoga.

In this regard, the most important consideration is the relationship between gravity, the spine (which houses the nervous system), and the breath – these three interact with one another to cause the relaxation of the sympathetic and the parasympathetic nervous systems, or said simply, they invite the easing of the body and the mind.

Gravity is like a magnet, wherein the earth exerts an attracting force on all objects within her atmosphere – similarly, within the human body, our energy is being attracted downwards through our upper body towards the base chakra, which is the seat of our energy.

The spine is designed to be lengthened, whilst maintaining its primary curves, and in so doing it may be raised against the force of gravity – so gravity could be said to be giving a context to the spine and the rest of the body, since if there was no gravity, we would float in space with very little sense of our bodies at all.

Breath (air) is the most vital of mother nature’s elements for human life – we can withstand extremes of cold and heat for a time, even no food, and water temporarily, but what we cannot do without for more than a few seconds, is air and the resulting possibility for human breath.

“when you inhale, you are taking the strength from god…..when you exhale, it represents the service you are giving to the world”
– b.k.s. iyengar

Prana – life’s vital energy – enters the body on a physical level through all that we ‘take in’, breath, food, sun’s rays, and so on, and it is the fuel for the mysterious alchemical processes which our bodies are engaged in throughout the day for so long as we breathe. It is up to us how we use this energy, and through first purifying the body and mind, and then raising the prana, we may learn to direct it like a laser beam, as our higher mind.

There is a beautiful indian legend which exemplifies the importance of the energy body in the human experience:

Strife for domination and power over the universe had not yet arisen; but then it did, in the form of a giant lingam or phallus that self-manifested in paradise. It was black in color, made of one piece – an obsidian of enormous proportions, but indestructible not just like any other stone that can be broken.

This giant phallus or lingam began to wreak havoc. It destroyed everything it touched, turning paradise into a veritable hell.  It devastated the pleasure groves and palaces of the gods. It filed down hills and even mountains. It bored through lakes. The gods donned their armor and tried to fight but could not do much. The giant phallus became unmanageable.  When it finally dawned on the gods that they had been defeated they remembered the great goddess that they had ignored for so long out of vanity.

Immediately they went to her, bowed down and requested her help. They sincerely pledged to recognize the great goddesses supremacy on the condition that she puts and end to the reign of terror of the all-mighty phallus. The great goddess agreed.

She manifested in the sky above, took hold of the phallus and slipped him into her.  Enfolded by the great goddess the phallus experienced such heights of ecstasy and pleasure that he was completely pacified.  All of the destructive madness was gone.

This is a beautiful tantric teaching – explaining that the deeper we immerse ourselves in the (energy) body, the more refined and exquisite our experience becomes and it is not merely meant that the male and the female bodies need to couple, since tantra alludes to a possibility way beyond this limitation – a depth of inner connection where the siva (male), and the shakti (female) energies merge as one within one’s own being……this is yoga.


Chris Nelson is the founder of Ashiyana Yoga Goa

On the cover photo: Elizabeth Rowan