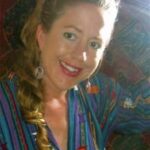 Kara Rane is an Artist working in a variety of…

“What is” Series video created by  Brett Larkin  for  YOGI TIMES What are Mudras?

Mudras, derived from Sanskrit meaning “sealing in the energy”, are elaborate hand and finger gestures which have symbolic meaning as visual language. Also known as Yoga of the hands and fingers, their energetic powers can be directed to heal and influence the energies within our bodies.

As visual language, mudras signify specific meditative practices, particular deities, and cultural rituals, such as dance, painting and sculpture. Each subtle physical movement conveys meaning to the viewer and to the practitioner.  The non-verbal communication retains the efficacy of the spoken word, relating such concepts as the ‘Good Law’, courage, adoration, and knowledge. These symbols point the way toward the goal of attaining Enlightenment.

My own deepening experience with mudras began with my will to heal – and in this case it was my hand!  While living on a tiny, remote Caribbean island one of my fingers was broken.  Due to an impending hurricane, it would be 10 days before I could get to the “main island” and see a doctor.  When I finally arrived at the hospital, I was told there was nothing that could be done for a broken finger, the nurse put it in a brace and told me that in 6 weeks it would be fine.

When the brace was removed, my finger would not bend.  The joint looked odd, and I had zero mobility.  My finger and hand ached to be fluid again, yet it was locked straight. The x-rays revealed my finger joint was obstructed by chipped bone, now mended wrong.  The doctor informed me I would be “crippled, and to deal with it.”  I actually did for a moment, and then in the next I resolved that this would not be.

As a healing modality, the fingers are understood as electrical circuits, re-directing the free flow of energy (prana) that is present in these discharge points.  When focused back into the body with intention, specific results can be obtained to achieve balance within.

Also Read>>> What are the Yoga Symbols?

Each finger is characteristic of an element

• The thumb is fire (Agni)
• The index finger is air (Vayu)
• The middle finger is ether (Awash)
• The ring finger earth (Prithvi)
• The little finger is water (Jal).

In accordance with the oldest healing science of Ayurveda, life (ayus)+ knowledge (veda), we are composed of these elements or building blocks.  All disease is due to an imbalance in the body caused by lack or excess of any of these elements, and once balanced the body can then heal itself.  Thus, Yog Tatva Mudra Vigyan is a science based on the principle of Ayurveda, and is an entirely distinct, independent branch of supreme Yoga.

Modern science has confirmed that there are concentrations of free electrons surrounding the tips of every finger.  When tension is applied to the fingers and parts of the palms, the energy is directed through the body along specified nerve conduit channels (nadis), radiates from central nerve locations (chakras), and flows back up to the brain.

This balancing and re-direction of the internal energy effects change to occur in the veins, tendons, glands and sensory organs, allowing the body to be returned to a state of wellness. Mudra Vigyan, therefore, is also a neural science as it relates directly to the nerves.

There was only one hand surgeon in the entire Puerto Rican territory that might be able to repair my finger. Overcome with obstacles, it became apparent the only solution was to get medical attention in the United States.

It was a year and a half before the bone was re-broken again in order to heal correctly.  The hand specialist had yet to see someone who had endured a stuck straight finger for such a length of time and was not certain the operation would be succesful.  I had dreams of bending my finger, of releasing the blocked energy that had no place in which to express itself.

The number of different mudras are count-less, many are esoteric and others newly created.  Mudras have been in use for millenniums, evidence of their practice being found on every continent, by all religious people and even among those professing no religion.  They are natural to the body, and many unconsciously apply this practice simply by touching their hands and fingertips in an instinctual way.

The profound transformation that occurs in the body and mind upon practicing or viewing the mudras generates various personal qualities such as clarity, contentment, self-confidence, fortitude, and happiness.

The accomplishment of  siddhi (perfection in fulfillment) of a skill, capability, or faculty can also be achieved through mudras.  This is to be known through the results of physical, mental and spiritual balance, but can lend itself to super natural abilities such as clairvoyance, levitation, bilocation, and psychic intuition.

My journey to recovery with mudras has lead to a healing of not only my hand and finger, but my relationship with the world.  I experienced the crippling effect of the body, but worse than that was the despair one feels when they have been injured by another human being.

When hurt physically in any way, there are also psychological injuries that need to be tended to.  By practicing many of these ancient postures, I was able to feel a force greater than myself, to be above the chaos of right and wrong, to encounter expansive peace, a freedom beyond suffering, and forgiveness in Love.

Mudras are very important gestures that are used in yoga, and particularly in Hatha Yoga.

The word Mudra is a Sanskrit word that translates to mean “sign” or “seal”. They are physical gestures that incorporate the hands, fingers, eyes, and other parts of the body.

Mudras actually stem from Hinduism and have been used in many forms of Hindu dance, like Kathakali, Manipuri, and Kuchipudi. In these dance forms, the mudras are used to express various emotions.

Yogic texts like the Gherana Samhita, Hatha Yoga Pradeepika, and Siva Samhita explain mudras in detail, as do tantric texts like the Upanishads. These texts list approximately twenty-five mudras that are particularly important to yogis.

The twenty-five most important yogic mudras are:

These mudras are used to influence prana (force of life). By holding these mudras we move prana around the body in a particular way, and this can influence our physical, mental and spiritual state. We can either direct prana towards specific regions of the body or mind, which is done for healing purposes, or we can use mudras to create a higher state of consciousness.

The spiritual importance of the mudras is explained in the Gherana Samhita, in which Lord Shiva tells Goddess Parvati that the mudras will grant great happiness and health.

There are 60 mudras in common use today, each offering its own unique health benefits.

For instance, the Makara mudra activates kidney energy and can be used to fight depression. Meanwhile, the Hakini mudra enhances communication between brain hemispheres, which leads to improved cognitive function.

One of the most important mudras for yogis to know is the Khechari mudra,

which is said to be the king of the mudras. It is a potent mudra that fills the body with a divine energy called Amrita, which in Hinduism is described as being the drink of the devas, which grants them immortality. Worshippers actually consume a sweet-tasting drink called Amrita, which is similar to honey. It is said to help the mind to attain higher states of consciousness, namely: Dharana, Dhyana and Samadhi. Practicing the Kehchari mudra is said to offer the same benefits.

Also Read>>> What is the OM meaning in Hindi and How to Chant it?

More popular are mudras like the Chin mudra and Jnana mudra, both of which are commonly used in yoga practice.

These mudras use the thumbs and fingers to create pranic knots that direct energy to specific parts of the body.

Another view of the mudras is the esoteric philosophical view. According to the philosophy, the thumbs and fingers represent specific things. The thumb represents Ultimate Reality (Brahman) and the forefinger represents Inner Reality (Jiva). Therefore, when we touch the thumbs and forefingers together we unite Ultimate Reality with Inner Reality. In this explanation of the mudras, the three remaining fingers represent the gunas: Satva, Rajas, and Tamas.

The Anjali mudra is the most well-known mudra in the world. It’s the same hand position used for prayer. This mudra connects us with the divine and produces inner peace.

This mudra is performed by gazing at the spot between the eyebrows, where the third eye chakra is located. This mudra activates the third eye, improving insight and psychic powers.

The Abhaya mudra is basically a stop sign. To perform Abhaya, we hold the palm of the hand outwards at just below shoulder height. This is a very important mudra in Buddhism and is said to stop fear.

The Dharmachakra mudra is performed by holding the middle finger of one hand between the thumb and forefinger of the other hand. This mudra represents the cycle of life and death and is said to inspire us to contribute to society.

This is another very well-known mudra. It is the hand gesture we most commonly associate with meditation. We perform the jnana mudra by placing the pads of the thumb and forefinger together. This increases wisdom and connects us with our deity.

The mudras are a powerful way of enhancing our yoga practice as well as healing the body and mind. And they also happen to have a fascinating history, which we have looked at above.

There are sixty different mudras in common use, and each offers its own unique benefits, so there is likely to be at least one or two mudras that would be applicable to your own situation.

Mudras connect ourselves to a higher understanding, a knowing of our own being, and an experience of One~ness that can be realized as God.  This is a focus in life, to awaken the spirituality that lies within and allow our radiance to shine outward in perfect harmony.

It is unity with the divine we seek to attain, a sealing of energy emanating in wholeness.  Mudras are an art and science perfected through wisdom, they imbue tranquility, balance, and serenity for You and all the Universe.

9 tips to remember your dreams

portable sauna – an in depth look

mother to be – tips for new moms