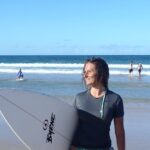 Maren Guessmann started his yoga studies in 1983, at a…

I can only write from the perspective of a sister to someone suffering from what we call paranoid schizophrenia, as a daughter of two doctors of neurology, psychiatry, and psychotherapy, as a physiotherapist, yoga teacher, and seeker for spiritual wisdom. This is why I understand both sides, the western medical approach to this mental illness and the indigenous shaman understanding of a sensitive, spiritually gifted person and troubled soul.

It’s been 16 years now that my brother first got diagnosed with paranoid schizophrenia. He tried to kill himself three times in the same night but didn’t succeed due to his mental state, his mind was so far away from the reality that he couldn’t manage. At first, we as a family didn’t know how to cope. We didn’t understand what was going on with my brother.

My Mom, who is a doctor of psychiatry and psychotherapy told him, that when he stops taking his medication and has another episode because of it, she will throw him out and dismiss him as a son. She was acting out of fear because she knew from work that if people with schizophrenia stop taking their medication all at once, they are prone to going into remission and with every episode the chance to live without drugs ever again goes towards zero.

Schizophrenia Spiritual Gift? A problem or an awakening?

Today my brother has had 4 episodes altogether and he still lives with us. We have learned a lot from him. As a family, we have grown very close together and we support each other in our journey of life with a lot of love, respect, and understanding. Sadly, this is not the case for many families. This is why I would like to bring light to this topic, to make family members and friends understand.

In early childhood, my brother always seemed different from other kids. At a very young age, he knew everything about dinosaurs and snakes, and often he would wander off, spending hours in nature and come back with a snake in his hand that he had caught.

One day, on a holiday in France, he saw a man trying to kill a snake. Obviously, the man thought that the snake would be a threat. My brother saw the snake as harmless and he ran off to get my father to help him stop the man. I will never forget how my brother was suffering along with this animal, watching it die in his hands. My brother was traumatized for days and wouldn’t stop talking about what had happened.

He wanted to kill the man for doing this to an innocent animal. He didn’t understand how one can kill animals out of fear and ignorance. He never seemed to be too interested in people but was fascinated with nature. He hated school so much that he would lie in bed uncovered and the window wide open during winter time for hours to get ill so he wouldn’t have to go to school. He finished the final exams successfully without doing too much for them, rather playing computer games throughout the nights.

When he was 20 years of age our Dad died in a car accident. He didn’t cry or anything, he SEEMED fine. Later he told me, that he didn’t FEEL too much when Dad died. Two years later he had his first episode.

This seems to happen a lot: Usually, it will be a traumatizing event or drugs that will trigger an episode. Something that makes sensitive people log off from their emotions, because it is too painful to feel them or because they lose their sense of reality due to mind-altering drugs. I will come back to the drugs later as I will talk more about the natural process of psychoses for now.

Imagine your feelings go way deeper than the usual when you are sad or happy, the feeling is ten times as strong or even more. On top of that, you pick up on energies of places and other people without knowing. You might be happy when you enter a place or not, where the energy is very negative.

These people pick up on these energies and don’t know how to handle them, they don’t even realize it’s not their own emotions they are picking up on and they will feel very overwhelmed.

Now I have witnessed many times, that if something really bad happens to a sensitive person, they will log off from their emotions. My brother only realized what we as a family go through when he has an episode when he had a girlfriend with the same condition and had to put her through a psychiatric hospital. That was a big wake up for him that traumatized him, so he had to go to the hospital himself again, where he is right now as I write this.

With my brother and many others I was allowed to witness (friends, acquaintances, and teens in the youth detention center where I teach yoga and meditation) it became more and more clear that once they log off from their emotions due to emotional trauma, their energy field is no longer protected, so they will be wide open for other energies or entities to cling onto them and express themselves through them.

Interestingly the ancient yogi’s teach that our electromagnetic field was once given to us as a shield to ward off cosmic rays and bad energies, of places and other people. Now, what happens if that shield is shut down?

It almost seems that if an episode starts, the consciousness is so far away from the body, that this person almost seems like an empty vessel, a body that still works, but it’s nobody at home to keep the door shut from unwelcomed unseen guests.

The same thing seems to happen with people having an episode from mind-altering drugs. Their mind or spirit is so far away that they have trouble coming back to what we call reality and entities can have a good play with their bodies and nervous systems.

My brother is usually a very nice and loving person, but when an episode starts, he will be full of hatred and very mistrusting towards us family members. We, as a family, have learned not to take it personally when he swears at us, using a harsh voice to curse us, although it is still quite scary at times we know he is having an episode and it is not himself speaking.

We do our best to keep calm and he finds that it helps a great deal to take him out in nature, on a walk through the forest (trees seem to release a lot of positive energy by walking amongst them) or sunlight. Caring for animals and plants also does a good job, as these are grounding and will distract the mind for a while. A quiet and empty room also seems to help settle the racing thoughts and if the voices in the head are too loud, he will have music playing on earphones to overrule them.

My brother doesn’t want to take his drugs, we told him to see them as crutches. Someone with a broken leg needs crutches to be able to walk, and if the mind trails off, one needs the drugs as a crutch to be able to stay in the realm we relate to as ‘reality’. He will only take high doses when he has an episode and when he is stable again the dose will be lessened down to a minimum intake. Sadly, this process always takes a long time, but it does a good job.

My brother displays strong psychic abilities, even though he doesn’t want to know too much about that kind of stuff. Here is a little example: one day during a sensitive state, I came home and saw that all the weeds in the garden looked like someone had pulled them out. At a second glance, I saw that they were actually LYING and drying out in the sun very quickly, and not a single one had actually been plucked, which was the case in the whole big garden. When I asked my brother about it, because I was wondering if he had put something on them, he said, “I felt sorry for the plants to pull them out, even if they are labeled as weeds, so I asked them to leave by free will”.

During one of his last episodes, my brother was pushing through what could be labeled as a ‘ God complex’. He had all these things happening to him that, to him, indicated he was enlightened, without realizing they were all illusions.

Schizophrenia in other cultures

When I went to Bali I was invited by some locals to join a huge annual ritual by the beach, honoring the spirit of the ocean. One guy, who seemed completely off the mental track to me, played a big role in the ritual. To me, the case was clear that he was in a schizophrenic state. When I asked the locals about him, they said, “there is no such thing as schizophrenia in our culture, he is a very spiritually gifted person, someone who has a strong connection to the beyond”. That struck me.

I have heard from other indigenous cultures that people who want to become a medicine man or shaman have to be spiritually gifted. Around the same time, I came across the book ‘The Bridge Between Two Worlds – a shamans view of schizophrenia & acute sensitivity’ by Odette Nightsky, a lady that had grown up in the Western culture and had healed her own schizophrenia through shamanism and now helps others.

With my brother, he did have an interest in the spiritual and New Age teachings but lost interest throughout one of his last episodes. When I asked him why he is not interested anymore he said, “I wonder how so many people can spend their whole life seeking for spiritual wisdom, when all they really need to do is be the human being they came here (on earth) to be and live their lives”.

From today’s’ perspective I think my brother is a very sensitive, gifted person who sometimes has trouble dealing with his emotions and then gives way to other spirits to work through him unconsciously. May he be insane or not, he is my brother, always will be, and I love him dearly, that is all that counts for me.

If this article helped you to get a bit of an insight about schizophrenia, please pass it on to friends, family, and acquaintances of people suffering from schizophrenia / acute sensitivity.

Is schizophrenia a gift? Tell what you think in the comment box below and please the article if you enjoyed it.

portable sauna – an in depth look