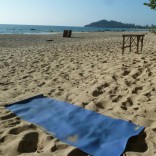 Jenny has been backpacking since 1997 and teaching yoga since…

In my experience in the yoga world, the word ‘ haá¹­ha’ is routinely mispronounced as if the first syllable was like the first syllable in ‘mathematics’; with the ‘a’ as in ‘cat’ and the ‘á¹­h’ as in ‘theatre’. I have encountered this so much that, I’m a little embarrassed to say, I don’t always pronounce it correctly anymore. Why not? Because I get funny looks from the person I’m talking to! I’ve even had teachers and students ‘correct’ me. So lately I have been unfairly judging my audience (not very ‘yoga’), and making a decision each time about how to pronounce it. But that has to stop – and this article is where I start stopping.

The term ‘haá¹­ha’, which you might be surprised to learn means forceful , generally refers to physical practices of yoga. Some interpret this as being solely Äsana (postures), but historically it also includes practices such as prÄá¹‡ÄyÄma (breath work), bandha (locks) and mudrÄ (seals or gestures). In the west, it is often used to refer to any form of physical yoga which doesn’t neatly fit into a style like Iyengar or Scaravelli. But the thing is, Sanskrit does not have a sound like the ‘a’ in cat or the ‘th’ in theatre… so how do we pronounce it properly ? The first thing to know is that the Sanskrit letter which is generally transliterated into western script as ‘a’ is pronounced more like a very refined person would pronounce the ‘u’ in a word like ‘cut’ – so almost halfway between a standard English ‘a’ and ‘u’ sound. The second thing to know is that the aspirated consonants in Sanskrit – like bh, th, gh – are pronounced by sounding the first letter with a short puff of air after it: try that holding your hand in front of your mouth and feel the air in your hand. So… ‘á¹­h’ is a ‘á¹­’ sound with a short puff of air after it (just like ‘ph’ is a ‘p’ with a puff of air, not an ‘f’ sound). Got it? Oh… and, just to make it really spot on, the dot under the ‘t’ in ‘á¹­h’ means that you lightly touch the tip of your tongue to the roof of your mouth as you sound the ‘t’…In other words, it is closer to ‘huh-t-ha’. Take a listen to Howjsay.com, a free online talking English pronunciation dictionary, if you are still not sure. And, if you are still doubtful, everyone I’ve met in India seems to pronounce it that way and that’s where yoga started right?

So what do we do with this newfound knowledge? This situation makes me think of my trip to Tanzania last year. I was under the impression that Tanzania was pronounced with an emphasis on the TAN and the NI – TANzaNIa. Pretty much everyone I had ever had a conversation with about Tanzania – a surprisingly large number of people – pronounced it that way too. But all the locals that I met over there pronounce it TanZARNia, with the emphasis on the ZARN, as if it has an R in it. Upon my return to Australia I related this little pronunciation story to my partner. His response? “Yeah, but you can’t go around pronouncing it TanZARnia in Australia or everyone will think you’re a [profanity warning] w@nker”. Hmm…he might have a point.

Of course the way that we share knowledge is always important, and not just to prevent ourselves from sounding like [profanity warning] w@nkers. I’m hardly going to put my hand up in the middle of a workshop, attended by 30 people, and say to the teacher ‘Um, excuse me, but I think you’ll find it’s pronounced ‘huh-t-ha’ rather than ‘hatha’. The teachings of yoga and the words of Henry James guide me here: “Three things in human life are important: the first is to be kind; the second is to be kind; and the third is to be kind.” There’s no fault in simply not knowing something, in getting something wrong – it just might have happened to me once or twice. As yogis and yoginis we don’t want to hurt or humiliate anyone. I wouldn’t even go up to the teacher at the end and say something like that. But I can pronounce it correctly (regardless of my audience), I can teach it correctly to my students, I can write a blog post about it, and you can all help by spreading the word.

I really loved Tanzania, or Tanzarnia, and I want to show respect by pronouncing it correctly. But it’s a country that I enjoyed visiting – I’m not sure that it’s my job to take on the world’s mispronunciation of it. And when you think about it, cities and countries are pronounced differently all over the world depending upon the first language of the speaker – Venezia versus Venice, for example. Yoga, however, is for me a lifestyle, a practice that I teach and also try to live and breathe. So I’m leaving Tanzania alone, but ‘haá¹­ha’ has to change. Why not try it on for size and let me know how many weird looks you get?

This article is the third in a series of articles considering Sanskrit faux pas. Check out the first two – It’s not the crow! and VÄ«rabhadra doesn’t mean warrior.

About Jenny Jenny is the author of Yoga for Travellers , a how to guide for anyone wanting to practise yoga on the road, both on and off the mat. She loves yoga and travelling and hopes to pass these passions on to others. For more information please visit the  Yoga for Travellers facebook page .

About Graham Graham is a London based yoga teacher, teacher trainer, occasional academic, and Sanskrit geek.