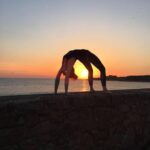 My Yoga journey started due to some serious mental health…

an interview with andrea lutz

the moon’s effect on prana

“It is the very error of the moon. She comes more near the earth than she was wont. And makes men mad.” —William Shakespeare, Othello.

Do you ever suffer from altered moods during a Full Moon? Perhaps you do not sleep soundly at night or feel generally off-center when Mother Moon shines in bright, glorious fullness? Have you ever wondered what effect the full moon has on us?

A Full Moon occurs when the moon rises on the opposite side of Earth than the Sun, meaning that the Moon is completely illuminated.

According to ancient philosophers, the Moon affects human behavior and health by its gravitational pull on body fluids (much like the Moon’s effect on the tides).

Some historical words provide insight into the legacy of the effect of the full moon.  For example, “Luna” (meaning “Moon” in Latin) is the prefix of the word “lunatic” and also the name of the Greek Goddess of the Moon. In the Middle Ages, belief in the “Lunar Effect” or “Transylvania Effect” persisted in Europe, when humans supposedly morphed into werewolves or vampires during a full Moon. Some believe the full moon can speed up the labor process for pregnant women and have more of an impact in altering the mood of highly sensitive people, empaths or those with mental illness.

The idea that a Full Moon is connected with lunacy may be an old wive’s tale, but there does seem to be some connection to the full moon and the effect on human beings. Scientists have investigated these and other lunar theories and repeatedly debunked them. They have been unable to substantiate any links between phases of the moon and human behavior. Many astronomers and physicists will tell you that the gravitational pull of the Moon on humans is virtually nil. (The moon influences tides in large bodies of water, but not water in our bodies…)

However, we can decide our own theory…maybe you notice a shift in mood or energy (Prana) during a Full Moon? I certainly did.  I became increasingly interested in this topic during a recent Full Moon. During the lead up to this day I was feeling low, not sleeping well, and felt unsettled. I could not put my finger on why these feelings suddenly arose. I spoke with various friends and colleagues who also noticed similar changes in their own feelings, such as low mood, interrupted sleep and wild dreams.

Diving deeper I discovered there is scientific reasoning as to why our sleep might be affected by the Full Moon and the days before and after a full lunar cycle. Sleep patterns are regulated by a hormone called Melatonin, released in the Pineal Gland (the Third Eye or Ajna Chakra). This area is considered the Seat of the Soul. The inside of this gland is filled with water and has higher blood flow than any other gland in the body. Melatonin is disturbed by light and stimulated by darkness, therefore it is justifiable to think that by having more light from the Full Moon at night, we have disturbed sleep. Certainly, during the last Full Moon, I found I was having strange and very vivid dreams!

To balance the unruly emotions and Prana, one suggestion is to avoid energetic ‘Yang’ Yoga practice (hot and active) and opt for a cooler and more restorative, opening ‘Yin’ practice. Instead of Sun Salutations, practice Moon Salutations (Chandra Namaskar), which allow us to quiet and slow down both the mind and body.

Watch out for the next Full Moon tomorrow…stay grounded with your practice, pranayama, and meditation.  Practicing a more restorative and meditative form of yoga during this time will help you remain centered and ward off any werewolves that may want to raise their furry heads and howl at the full moon!