Typical of hip hop shows, hands were waving in the air at Portland’s Alhambra Theater. But unlike most – or maybe all – other rap shows, the audience responded to the rapper’s prompts with an “om” here and a “Jai Ganesha!” there. MC Yogi and DJ Drez were spreading their message of love, peace, and yoga to a packed and gyrating crowd.

Between songs, MC Yogi paused to tell stories. He recounted an earlier trip to Oregon, when he was a young graffiti artist and skater in the Bay Area and already having brushes with the law. Drez, his buddy since childhood, got them the opportunity to come to Oregon to paint graffiti-style murals on a skate park. He rapped about how he didn’t want to be a juvenile delinquent and that yoga helped turn his life around. Meanwhile, DJ Drez kept the beats going with a complicated mix of turntables and computers, including a pink laptop decorated with a big white “Om” sign.

Between the Christmas lights on the stage and the fact that it was Drez’s birthday, the show had a festive atmosphere. Partway through, MC Yogi called a couple of local acro yogis to the front of the theater. The duo proceeded to lift each other in a series of amazing balances while MC Yogi rapped about flying.

Many fans sang along at Friday night’s show, and everybody danced. Highlights of the set included a rap about Gandhi and one about how Ganesha got his elephant head.

MC Yogi came to fame after releasing Elephant Power in 2008. He followed it up with Pilgrimage in 2012. MC Yogi and his wife Amanda Giacomini also teach yoga. They own Yoga Toes Studios in Point Reyes, California. 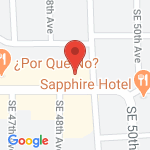