The Bhagavad Gita, like the Patanjali’s yoga sutras, is a foundational yogic text. Besides being essential reading in many Yoga Teacher Training programs, the Gita is a piece of Indian literary history, and an epic poem comparable to the greatness of Homer’s Iliad and Odyssey. But perhaps most of all, it’s a guidebook on how to live a life of kindness, selfless love, and service.

Arjuna is a great warrior who has just stepped onto the battlefield. He and the rest of his clan, the Pandavas, are going to war against their evil cousins, the Kauravas. But before the battle begins, Arjuna hesitates, and considers backing down and abandoning the war – how could it be right, slaughtering his kin? – that is, until his charioteer, who just so happens to be the God Krishna, steps in to not only convince Arjuna to stay and fight, but also to teach him the art, science, and philosophy of yoga. Stephen Mitchell’s translation of the Bhagavad Gita is fresh, poetic, and strikingly modern. The verses flow with such elegance, that it’s easy for one to forget that they are reading a text that has been translated from ancient Sanskrit. Regardless of whether you are a scholarly yogi who is always on the hunt for a good translation of the Gita, an everyday yoga practitioner looking to deepen their understanding of yoga philosophy, or somewhere in between, Stephen Mitchell’s Bhagavad Gita is a delightful, accessible, and pleasurable read.
Skopje , The Former Yugoslav Republic of Macedonia , Macedonia, The Former Yugoslav Republic of 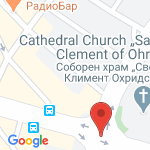