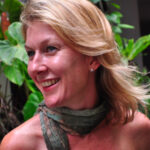 Janelle Maree is a health & wellness coach who loves…

yoga and horses, finding your inner awareness together


I sat down with American born Kirtan musician Dave Stringer while on retreat at The Sanctuary at Two Rivers in Costa Rica. Dave describes how he found the path of singing, his definition of devotion and how Kirtan has changed his relationship to the world.

Naga for Yogi Times: So Dave, what has your experience been here in the jungle?

Dave Stringer:  Incredibly peaceful and incredibly noisy. People often say, “Oh, I long for the peace and quiet of a place like Costa Rica,” but they’ve obviously never spent any time here. There is a whole world of insects and frogs and monkeys – a whole lot of life going on, which is a really beautiful and interesting thing. At first, you think, “Wow! We’re so far from anything, and we’re so isolated, and this is so fantastic.” But, in a funny way, after spending a week in the jungle, I came to the conclusion that everywhere is the jungle.

Naga:  When we sang Kirtan, the mantras were added to the cacophony in a harmonious way. I think the monkeys were roaring back at you at one point, weren’t they?

Naga:  Why would you say it is important to go on retreat?

Dave Stringer:   Well, I don’t think you have any perspective on what’s happening to you until you are able to step away from it. I think with the stresses of life, we simply become used to it. We don’t notice because it changes so slowly, one day maybe only a little more stressful than the last. So unless you step away from your circumstances, you can’t really take the measure of the circumstances you’re in.

Naga:  When did you first start singing?

Dave Stringer:   I started singing before I remember singing. When I was little, my mother came up with a strategy for me to deal with the monsters I thought were under my bed.  It was great because she didn’t say there weren’t any monsters. She agreed, there were monsters, and then we needed a strategy to deal with them. She suggested, if I sang a beautiful song, then maybe they would be charmed and wouldn’t hurt me. It turned out to be a great strategy, because they didn’t hurt me and it became my way of dealing with the world. Singing was a transformative process. It was a way of changing my relationship to the world. I was five when my mother instilled that in me, even before it was clear that being a musician was my dharma and destiny.

Naga:  At what point did your dharma shift to the devotional?

Dave Stringer:   In a way it was always devotional because I was singing to make sense of my relationship of self to universe.  I was making sense of the relationship between my sense of smallness and my sense of the hugeness of the universe. I think a lot of musicians are actually coming from this place. To put a specific spiritual or devotional frame around it, I find that even now I resist that. This whole idea that there’s music that’s spiritual and then music that’s not spiritual, imposes some categories that don’t really exist.

Naga:  For those not familiar with the science of Kirtan, how do you define it in layman’s terms?

Dave Stringer:   Kirtan involves the technique of singing in a call-and-response fashion. A lead group calls out a phrase, and the audience responds. It’s a little model of the interaction of self in universe or self and other. We sing simple Sanskrit mantras, names given to the divine, beautiful metaphors of our relationship to love in the universe. They are very simple so that you can close your eyes and get lost singing them. Ultimately, the idea and the experience is that the singer merges into the song, the audience merges into the band, and all enter this space where there isn’t a distinction between audience and performer, singer and song.

Naga:  Some people call Kirtan a form of Bhakti yoga. In your words, what is Bhakti?

Dave Stringer:   Well, many people say, “Oh, Bhakti is the yoga of devotion.” Devotion seems to imply that there’s a relationship of being devoted to something so that there’s an object. For me, the experience of singing is one of utterly blurring any distinction between subject and object, between self and the divine, so I prefer to think of devotion as a feeling streaming through you, the energy before there was a universe or before there was time. It’s an awareness of how intimately connected to the source of all things that you are. Devotion, in this sense, means a yoga of being at home in the world. It is the yoga of feeling imbued with the sense of wonder and mystery and imagination. One is being asked to immerse one’s self, and fully jump into the experience. From that perspective, devotion is complete immersion into what is.

Naga:  How has Kirtan changed your life?

Dave Stringer:   It has changed my life in the sense that it has become a way of life. I sing in 14 or 15 countries every year. It has given me a sense of being at home in this universe. I feel like I have friends everywhere, and even if I have not been to a place before, I will find community in those places when I arrive. It’s easy to look at this universe as a hostile and competitive place, but it is also a place full of altruism, kindness and compassion. I think we ultimately have a choice to decide what kind of universe we want to live in. Singing has helped me to focus and be immersed in a world that is full of wonder. It’s a very nice thing. Other pieces on Dave Stringer: • the adventures of dave stringer, kirtan in a blues bar • interview with dave stringer – i am “doing it”