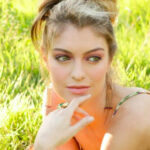 the value of a good teacher

Sitting across from Goli Gabbay, one feels uplifted by her energy, her sincere passion for her work and her thirst for improving the lives of those who cross her path. Her eyes gleam with joy and benevolence, and her magnetism of friendliness facilitates an instant rapport. Witnessing her reverence for humanity, it is no surprise that Goli uses yoga to help mend lives every day.

Goli first felt moved by yoga in 1995 when she was confronted with a serious health problem and searched with desperation for an alternative healing modality. Something powerful opened in her when she attended a Kundalini yoga class; it roused the polestar that would lead her to her calling—and ultimately her greatest happiness and fulfillment in life—to teach and help heal people with depression, anxiety and other imbalances.

Goli began practicing consistently after attending her first Summer Solstice annual Kundalini retreat in New Mexico, during which she received an astonishing message in savasana. “Literally, it was so clear,” she recounts. “A strong voice came inside of me and said, ‘Goli, you must teach now.’” Empowered with a firm purpose, she undertook her first teacher training through the Kundalini Yoga Research Institute, then completed two more trainings at Exhale and YogaWorks.

Goli combines her knowledge of the energy system, the chakras and the nervous system—integral in Kundalini yoga—with the precise alignment instructions of Iyengar yoga to teach a cohesive flow-based class. She also utilizes techniques of guided relaxation, visualization and meditation, customizing her class to the physical ailments of each student. Common to every class is the inseparable mind-body connection. Goli delves into observing the nature of the mind, helping people discern that the constant mental chatter is not who we are. Then through observation, she leads students toward finding and cultivating that quiet space in the mind. “My goal is to guide people, whatever physical ailment or mental health issue, into that place of savasana that is bliss, peace, well-being and wholeness, which everyone embodies but forgets because we think we are separated from that somehow,” she explains. Goli understands the human system as being multilayered, composed of physical, mental, emotional, energetic and spiritual parts. When the mind is quiet, the body can relax as the nervous system calms down and the energy systems become balanced.

Occasionally Goli faces the challenge of encountering resistance in her clients, especially since they are often suffering from anxiety disorders. However, never ceasing to watch recoveries firsthand, Goli prevents discouragement with a deep conviction of how powerfully yoga contributes to healing and wholeness. “I think I am able to work with resistance because through my commitment to my students’ lives, 99% of the time they’ll have the opening,” she says. “If I come with that belief, it doesn’t matter what you’re dealing with, you just come here, you just show up and I know it’s just a matter of time before you experience a breakthrough.” Goli is gifted in attuning herself to each client’s unique needs, an invaluable attribute when every person’s body gives off a whole different set of information. She believes that one of the most important facets of the healing path through yoga is the dynamic sensitivity, love and compassion between student and teacher. This exchange is “a sacred space in which you’re with their breath, you’re with their body, you’re with their emotions, you’re with their soul, you’re with their heart, you’re with their pain and you’re with their triumph. And…what an absolute honor to be in that space: to really see them and to love them as they are, and to see their greatness and their humanity all at once.” She is inspired by the commitment her students make, completely dedicated to shifting unhealthy emotional and mental patterns that they’ve lived with for 20 or 30 years. These students are steadfastly taking on their lives and displaying the courage to open themselves on multiple levels. “I never thought it could move me so much,” Goli says. “I have literally been moved to tears watching how just through the practice of yoga, in a month a human being can completely transform and shift who they are in the world. I never thought that I would be a part of that and have the honor to provide that for another human being; that has surprised me. Through my own growth and where teaching has led me I’ve had profound experiences, case study after case study, group after group… profound, life-altering experiences.”

In addition, Goli finds a natural synergy between her personal life and her career. Rather than seeing a separation between yoga as a profession and her own journey, she feels that both aspects of her life foster each other. “I get so fulfilled by what I do and it actually energizes me so I can use that when I’m home with my family,” she says. “Teaching yoga and certainly practicing yoga gives me the energy and joy to fully experience the other areas of my life; it’s my calling. You think you’re giving when you’re teaching, but it really gives me so much. If yoga were a person, I would embrace it tightly, give it a big smooch and say, ‘Thank you! I love you!’”

Goli now practices as the resident yoga therapist at Moonview Sanctuary and Bridges to Recovery, two exclusive psychiatric treatment facilities where she works with celebrities, corporate executives, athletes and people dealing with anxiety, severe depression, eating disorders, trauma, bipolar disorder and addictive behaviors. Furthermore, she is on a select team of complimentary practitioners at UCLA’s Collaborative Centers for Integrative Mind-Body Medicine. She has also established corporate wellness and stress-reduction programs at a range of businesses, including Tiffany & Co. and NBC.

“Yoga gives us access to peace of mind and relaxation,” Goli affirms. “It’s such a crazy time, and living in any city we are bombarded with so much stimuli that it’s not a luxury anymore to practice yoga; it’s an absolute necessity for well-being.”  Open-minded, open-hearted and with ineffable faith, Goli stands unswerving alongside her students as they plunge together into a stunning inner territory of depth, unfolding and true ultimate healing.

Goli is now mostly teaching privates throughout the Los Angeles area and at special events across the globe.