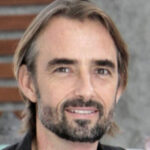 Publisher, Founder of Yogi TimesJean-Christophe Gabler moved from France to…

A while ago was one of those cold, yellow-gray Michigan winter afternoons. In a small, damp, unheated and deserted tool-and-dye factory, a group of three black and red parka-packed construction workers signaled silently to each other by wiping their noses on sagging black gloves, with leather pads on the palms.
They prepared to go home, with their bulky arms stretched out sideways, as if this wayward asana would propel them sooner out of the rubble.

The trio zigzagged their way over half cut cinder blocks, coiled and unattached electrical cords and freestanding beams of two-by-fours. They moved towards the bleak doorway – a nailed up sheath of heavy translucent plastic. Their yellow-booted footsteps avoided various construction tools and traps.

The men had been well trained. They hardly noticed their shuffling slow-motion efforts, or that one more day of dedicated work had just concluded without injury.

I had been meditating in the middle of that cold cement-floored embryo of a yoga studio every day for the past nine months while construction workers of various trades and unions deconstructed and reconstructed the physical space around me. Four other yoga teachers rotated this task with me for each of those days.

There was no heat or electricity, and the toilet was either a bucket in the middle of the building, or the gas station next door when we remembered to ask for the bathroom key before they closed for the day.

Four hours later, a light bulb was hooked up to the battery of a car, with a cable running through the window. Some carpet remnants were brought in. Soon, 128 yoga friends began to arrive at that cold shell of a building, bringing folding tables laden with steaming, hot food. Someone brought a battery-operated boom box, and 128 people started dancing. At midnight, I led our first group yoga practice and meditation.

Six years later, I led my last. This is a story of how to sell a yoga studio.

Get Real about your sell

My husband’s career changes forced us to relocate. By the time we moved, I was running two yoga studios. The combined teacher training programs of both studios had an annual enrollment of over 90 students.

There were close to 100 regular classes in both studios per week. We had a total teaching staff of 40. Specialized programs and regular workshops involved research, education and teaching in yoga for Multiple Sclerosis, Pregnancy, Kids, Better Backs, Cancer and Recovery, The Wise Women, The Wise Men, and Golden Years yoga. We had the deaf and blind in yoga class, we had yoga classes for those in wheelchairs, a regular prosthesis group and Yoga for Children with special needs.

On the national level, I served on the board of directors of Yoga Alliance and the advisory board of the International Association of Yoga Therapists. Our youngest daughter completed our teacher training course, and was a staff teacher at the studio. Our eldest daughter helped at the front desk. My husband, the motive driver and advisor of the business aspects, was involved in the day to day business management.

Also Read >>> Legal issue to consider for your Yoga business

In the market place, yoga studios generally fit into three categories: health club facilities, the large franchise operations, and the yoga shop around the corner. I was in the last of these three. The studio grew up in an already competitive, yoga-populated market in the Detroit area of Michigan.

There were three major yoga studios within 15 miles. We were not the first kids on the block, but the studio did offer the first teacher training program registered with Yoga Alliance, and was distinguished by the support and blessing of the community it was drawn to serve.

The studio was fiscally self-sustaining, so when my husband had to relocate I had no trouble selling the business, although recent reports point out that “the interest in yoga does not always translate into big business. Expenses include rent, advertising and wages for additional teachers. The uncertain economy also makes it a touch-and-go proposition, because exercise is often one of the first things people cut out of their budgets.”

So it was time sell the shop. This is different from going out of business.

In order to sell a yoga studio one must achieve the following:

• Present the accounting information by which the buyer can analyze the current and potential money making situation of the business.

• Produce all tax information, payroll information, and profit/loss reports. These are generated either electronically depending on how the books are kept, or by a bookkeeper and accountant.

• A mutually agreeable price and payment system must be arranged between the buyer and seller, written down, and perhaps reviewed by a lawyer.

• The state must be notified as to the change of ownership for tax purposes.

• Credit cards must be cancelled.

• Suppliers of products are best notified as to who will be in charge of ordering merchandise.

• If there is a school involved, then title, name change, and curriculum changes must be reported to the organization(s) with which the school is registered. • Logo use and transfer must be clearly defined in writing, as is perimeter relocation in the case of the seller wishing to open a studio within conflict of interest distance from the original studio(s).

• Previously arranged workshops, special sessions, special advertising promotions, etc., must be extended to include a profit split prior to the sale.

• Web site server, web master and/or mailing lists must be transferredAnd then, teachers must be informed.

Students must be prepared. One needs an exit strategy. I didn’t have one, and this is why. After several years, due to the fellowship of hundreds of students and teachers, the studio, nicknamed by Scott LaFond as ‘The Mothership’ was known around town as a kind of yoga community hang-out.

Television and newspaper reporters frequently ran stories about us with stock bylines such as, “All tied up in Yoga,” or “Twist and Shout for Yoga.” The question, “and you are the owner?” was always part of the interview. This is actually a trick question for a yogi.

1) A process, or practice, that an individual ‘does,’ is called yoga.

2) yoga is also a defined and final state of being. The methods and the aim are both called yoga.

This makes it hard to sell a yoga studio. One must get rid of what one can never release, and one must sell what one never owned. One must involve the spiritual principal while evolving the return in hard cash. One must practice the discipline and the achievement simultaneously.

I know of no other business, excluding perhaps the fine arts, in which such a thought process is required, except perhaps if one was able to buy a church from God and then sell it back to Him. At least that’s how hard it feels.

My key to the studio no longer opens the door.
And the last time I visited, I had to knock to be let in.
That sounds like closure.

How To Disappear after selling your studio

At the studio at the end of every class I recited these lines from Li Po: “We sit together, the mountain and me, until only the mountain remains.” I reminded all our new teacher trainees: the role of a yoga teacher is to disappear.

Without the ego invading the system, the practice becomes authentic for each student. The teacher is there to assist in cultivating the environment for students to develop ever-increasing ease in accessing inner space.

There are numerous methods for a teacher to ‘be there’ until this can be achieved, but only one way for yoga teacher to disappear. The challenge is to know when to dissolve enough for students to find and trust their own current of air, or breath, which allows them to safely explore their own practice with confidence. The teacher strives for these conditions.

All the pieces of opaque, stuttering impressions lose their power and interference of nonessential activity, and there is nothing to struggle with. For students, it is a launching pad delicately recognized as a point where spirit and the definable, healable self merge. For teachers it is the art of stepping soundlessly aside. Dissolving: not solving, or evolving, anymore.

So one day, at a teacher’s meeting, I quietly told everyone that I was getting out of the way. Two weeks later as I taught my last class in that room, I said to myself: unfold the wings of the heart so it becomes weightless. If it is weightless, how then can it be a burden?

Until Only The Mountain Remains

My key to the studio no longer opens the door. And last time I visited, I had to knock to be let in. That sounds like closure. But closure is also a tricky-wink idea for a yoga person because it tries to remedy – wrongly – an impossibility. Nothing is ever closed. It just changes physical or psychological shape. We understand this with water in its various forms: liquid/solid/gas. And even with our cells: degeneration/regeneration.

But with something in which we are so emotionally invested as yoga, the closest I could get to closure was the sadness in knowing that as I stepped away from the Mothership, I know that I left some orphans. A yoga teacher once told me that we all know what pain feels like.

Only the mountain remains and then the rocks, too, disappear one day so that the real teacher in us is free. To unfold the wings of the heart so that it becomes weightless and to answer the question, “do you own this studio?” with a smile.

5 essential life skills that you can train with yoga

how to become a yoga instructor in 2023

9 tips to remember your dreams