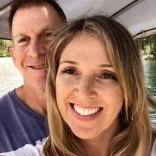 how injury was a valuable teacher on my YTTC

I thought I was tough. I was sporty and strong in the unremarkable gym sort of way. When I took my first yoga class, it was a level 2/3 on a VHS tape. A measly level 1 beginner class didn’t sit well with my self-image but I wanted to learn the poses before I did them in front of people. I grunted and groaned and fell all over my living room then put the tape away for about a year. I needed yoga on so many levels back then and had no idea why.

Last year, I discovered the Shakti and Bhakti Festivals at the Joshua Tree Retreat Center and they lifted my practice and awareness to a whole new level. Bhakti Fest was started as a promise fulfilled by founder Sridhar Silberfein to his guru, Swami Satchidananda when he introduced the holy man to the largest crowd ever assembled on American soil at Woodstock in 1968. Silberfein said someday he would gather just as many people to practice yoga and sing Kirtan music, but in a spiritual, drug and alcohol free environment, and forty years later, he did just that.

Shakti Fest is Bhakti’s sister festival and translates to mean a celebration of the feminine divine. Since Shakti Fest is always held around Mother’s Day, it’s the perfect excuse for a girl’s weekend or a chance to introduce yoga to the family since kids under 12 are free. So far, though, I’ve always taken the girl’s weekend option.

Both times after my festival experiences, I felt clean and strong and my mind felt connected to those around me, despite the fact that we were all so different. I wanted to know how I could bring yoga to those around me who didn’t know how good it could be. So I decided to ask the masters.

There are three yoga halls at the Joshua Tree festivals, only one of which is indoors. When the sun is still nestled between the desert hills, Yoga Hall 2 isn’t as hot as it later becomes. The morning brought us beautiful Hemalayaa. She was all sparkle and shimmer radiating from a grounded spirit. Her energy commanded that we discard our divisions and unite in our beauty no matter what we looked like. At the end of her class, we were all dancing, as a Kirtan band played behind her on stage. There was screaming involved and it could have felt weird outside of this spiritual haven but on that day, for a few minutes, we sparkled right along-side Hemalayaa. I asked her later why she does yoga and she said, “So I can show up every single day. So I can get rid of the B.S. and get to the Bhakti.” Bhakti is the essence of love and devotion. Her tip to beginning a practice: “Find many teachers, not just one. Find your mentors, teachers and guides, to be in your fullest, richest experience of life.”

One thing about both Shakti and Bhakti Festivals is that they are very popular. If you want to take a class with a well known yoga teacher, you have to have a strategy. Sometimes your strategy doesn’t work out and you’re forced to find another class, but fortunately the festival is full of them. That’s how I discovered Yogrishi Vishvketu.

As we found ourselves in Yoga Hall 2 again, we gathered our mats in spots still hidden from the blaze above. My girlfriends and I had no idea what to expect, so when a little man in monk’s garb appeared before our group and started to talk about making little honey bee noises, we just went with it. Yogrishi’s soothing voice, coated in a sweet Indian accent, chuckled between irreverent words. He told us that the moan we make when we are in pain and the moan we make when we are in pleasure are almost identical. Yogrishi says this sound sends a signal to the mind for healing. He told stories like the the one about the bunny and the cockroach who are both looking for happiness.

I decided true enlightenment had to include humour. I asked him at the end of class, why he does yoga. He responded, “To be normal,” and he laughed. Realizing I wanted more, he elaborated: “To continue to be normal and continue to be connected to my higher self, to be compassionate.” Well, I loved that and after I got home I looked up his ashram in the Himalayan Mountains and dreamed of going. His tip for beginning a yoga practice: “Pay attention to your breath.” Personally, I think that’s for an advanced practice. He is coming back to Bhakti Fest on September 7, 2017.

There is a staggering amount of workshops and lectures held throughout both festival weekends. We wandered into a workshop on Tantric Sexuality that involved staring into the eyes of a stranger for the longest minute of our lives and the feathery touch of rose petals. We sat in on a talk by Radhanath Swami who told ancient stories about devotion and overcoming obstacles. Each left our brains buzzing pleasantly with the gift of exploring ideas that we didn’t have time to think about in our real world.We ate our meals in the courtyard in front of the Main Stage where musicians performed from morning until late into the night.

We finished our yoga day with a journey into the world of Mas Vidal. With the fading sun and the darkening pompoms of yucca bushes as his backdrop, he held the space around us while we froze in poses of his choosing. He told us “Bliss is your birthright” and it sounded fair so we believed him. He told us, as we held chair pose far longer than normal, that initially our environment is more powerful than our will but then our will becomes more powerful than our environment.

I asked him after class why he practices yoga. “I do yoga to realize my spirit is one with all of existence,” he answered. His tip for someone about to start a yoga practice: “Make it simple, make it convenient. It should work easily into your lifestyle.” He also recommends spending time with someone who already has a yoga practice so you could learn from them and have a partner to share your discoveries.

The beauty of the yoga and music festivals is that they allowed us to explore many more teachers and styles than I was willing to commit to financially at home. It exposed us to music, food and a culture outside of our suburban bubble. It opened my mind to possibilities I didn’t have time to think about as a busy mom, classroom volunteer and in between chores writer.

Read next >> 5 things you should know before your solo journey