Larry Schultz (November 14, 1950 – February 27, 2011) was an American Yoga teacher. Schultz is primarily recognized as a creator of Power Yoga as well as Schultz’s Rocket Yoga. 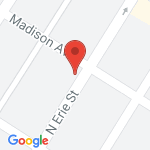