With all of the driving about done in L.A., I like to have my neighborhood-specific healthy-food go-to”™s ”“ you know, when I”™m stuck somewhere with a rumbling belly sans lunch bag.

In Santa Monica, I count on Real Food Daily for an organic meal made with love; more often than not, I end up with the marinated-tempeh Reuben. In Westwood, it”™s always Native Foods. In the Fairfax District, I hit up Messob. Anywhere near Culver City? If I”™m looking to stretch my dollar, I head to the no-frills Govinda”™s at the Hare Krishna temple for an all-you-can-eat veggie meal for a mere $6.

And now that I”™ve found the Flowering Tree, I never again have to worry about starving in West Hollywood. You see, I”™m one of those who gets really cranky when I skip a meal. I like food security.

First, let me say: there”™s nothing fancy about the Flowering Tree. The mint-green walls are unadorned and the six tables are simply functional. Staff are friendly but won”™t fuss over you. Dishes are meant to nourish the body, not to be dressed like a Gourmet photo spread.

The small restaurant serves breakfast, lunch and dinner, as well as smoothies, hearty fruit juices, organic coffees, teas and specialty beverages like green tea or ginger slushies. It”™s incredibly casual, the kind of place you could drop in at just about any time.

My two companions and I decided to see what dinner had in store. Even on a weekend night, things felt remarkably still ”“ no music, one server and a quiet cook in the kitchen

We ordered a plate of nachos ($7.25) to share, for some nearly instant gratification while we explored the menu possibilities. Upon our request, soy cheese (an extra $1) and soyrizo ($2) were added to the pile of chips, black beans, tomatoes, onion, cilantro and guacamole. I don”™t ingest dairy often and therefore tend to shy away from traditionally over-cheesed nachos ”“ so this vegan version was for me a fun anomaly.

For the chicken pomegranate salad ($9.25), we requested that tofu replace the meat. The substantial pile of fresh organic greens was livened with sweet, roasted walnuts, a couple of mounds of goat cheese and shaved fennel ”“ all further refreshed by a lovely pomegranate vinaigrette. I made a habit of getting the soft cubes of tofu and crunchy nuts together in the same bite.

We soy-obsessed diners again asked for the tofu ”“”“ this time five-spiced ”“”“ instead of the chicken alternative for our TFT stirfry ($10.50), served with brown rice (we could have opted for soba noodles). The medley included snow peas, zucchini, yellow squash and carrots stirred up in a mild sauce; it felt nourishing but lacked a certain zing. It could have benefited from a dash more spice, more body.

One of the specials, vegan lasagna ($10.50), rekindled our taste buds. A neat square intersected with lasagna noodles, it held a mÃ©lange of vegetables sharing a common bond of soy cheese, which accentuated the dish perfectly. The lasagna, more robust than intricate in flavor, was so filling that we hardly touched its colorful side salad.

Los Angeles-based Alaine”™s Bakery makes the desserts and snacks offered by the restaurant. On the night we dined, two pretty vegan cakes ”“ a lemon raspberry and a chocolate brownie (each $4/slice) ”“ called to us. Both were dense, but the best bit: the finger-smacking, almost dangerously sweet layers of frosting…made with tofu!

This little eatery does a fine job at doing what it does: keeping the people healthfully fed. Without pruning and preening, or getting caught up in that wishy-washy world of trendiness, it shells out good-value portions of hearty fuel to help us along just a little in our lives. I mean, do we really need much more? 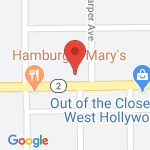