It’s noon on an unusually balmy day in San Francisco’s Noe Valley district. I’m in an airy attic loft, surrounded by the blissful sounds of Sanskrit chanting and an aura of peace distinctly unlike any I have ever experienced in a yoga class setting. In this case, it’s hatha yoga with Jaya, the newest teacher at one of the city’s oldest ashrams: Integral Yoga Institute. The Institute is devoted to not just the asanas of yoga but its complete philosophy.

“Remember, you’re not here to compete with anybody,” Jaya intones. “Don’t worry if you can’t do the posture. Just come back to the breath and let yourself go as far as you can.” These words of encouragement get me to go deeper into my dhanurasana (bow pose) than I might have otherwise.

The Integral Yoga Institute, which opened in 1970, is more of an ashram than a yoga studio – which seems to eradicate the competitive edge I’ve found at many studios. The Institute is based on the principles established by Sri Swami Satchidananda, a revered yoga master devoted to peace and service to humanity. Born in India, he lived until 2002 and left behind the Yogaville ashram in rural Virginia and several other centers around the world. As the Institute’s mission statement declares, “As one practices yoga, the body, emotions, and intellect become perfected tools for service to humanity. At the same time, all obstacles to the realization of perfect happiness gradually drop away.”

The Institute is grounded in the acceptance and unification of multiple faiths and belief systems. The Institute’s logo – a beautiful lotus in full bloom dotted with religious and spiritual symbols from various faiths – emphasizes the center’s engagement with the tenets of peace and harmony that permeate all cultures. As Swami Satchidananda’s motto simply states, “Truth is one, Paths are many.”

Another aspect that sets the Institute apart is the focus on breathing. Institute Director Swami Vimalananda explains, “In going back to the breath, we get to really experience the full effect of the posture. We believe that when we calm the mind and body, we abide in our true nature, which is peace. So we’re going from body to breath to mind to peace. This is a principle that runs throughout our classes.”

The classes typically run one hour-and-twenty minutes, but only 45 minutes are devoted to the postures. The rest of the session emphasizes pranayama and short, silent meditations. I took the hatha yoga for beginners class, which felt fairly leisurely compared to other classes I’ve taken. The room is permeated with such an aura of comfort and such a meditative approach that it feels almost novel. (Yogis who want more of a challenge would probably do better with the mixed level hatha yoga classes.)

Vimalananda also describes the Institute as very “teaching-based.” Aside from daily yoga classes – mixed level hatha yoga, hatha yoga for beginners, and gentle yoga and yoga for practitioners with HIV, to name a few – the Institute holds meditations, teacher trainings for gentle yoga and raja yoga, and various healing seminars. There is also a medley of sangha events, such as the Institute’s upcoming evening of chanting, a two-hour Gayatri mantra.”

We do have a certain percentage of people who only come for the yoga, then leave,” says Vimalananda. “But this is more of a community, so people do come back for our other courses, for the sangha events and just to be in the space.”

It’s not surprising that yogis from all walks of life come to Integral Yoga to bask in the space. A  sprawling three-story Victorian with a handful of airy yoga studios (with names like Jyothi and Bhakti) featuring soft blue carpets, eggshell-colored walls and bay windows, the Institute feels more like a retreat center than a place to get your daily exercise fix. The garden boasts a menagerie of multi-hued flora in full bloom, as well as statues of deities from a plethora of religions that snake a path back to a three-dimensional depiction of the Institute’s lotus logo.

“We want this to symbolize that though there are many paths that may look different, they’re essentially the same and lead back to one god, one source,” Vimalananda tells me.

I sit quietly for a few moments, basking in the enormity of that message as well as the general beauty and contemplativeness of the space. Eventually I head out into the city, safe in the knowledge that I’ve discovered yet another calming refuge in the midst of urbania. 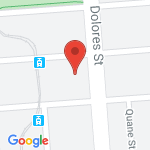