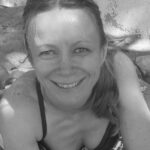 finding balance on a friday night

On January 7th, a terrorist attack against the French satirical newspaper Charlie Hebdo killed 17 people. Like millions of others, when I heard the news on Wednesday morning, I was horrified, shocked, in disbelief, and overwhelmed by a shroud of sadness. Like many French people I felt the victims were members from my family. Being thousands of miles away from home made it difficult to connect with what was happening in my home country, to understand, and to grieve. So with a friend of mine, we decided to join the several hundred people, most of them French nationals, gathered in front of the French consulate in downtown San Francisco at 7 pm at night. We went there not knowing what to expect. I usually do not like crowds, they frighten me, and I tend to avoid them. That night, it was different. I felt the urge to go. Many people came to the vigil holding signs that read “Je suis Charlie,” (“I am Charlie”) to show their solidarity. Other held drawings, pens or candles like me. Everybody there had come to pay respect, be together and to stand up for freedom of expression. What I experienced that night was truly overwhelming. It was a deep feeling of compassion towards the victims, and their families, towards a country. Some people were crying, and lots were silent. Someone read the names of the victims, and twice the crowd chanted the French national anthem, La Marseillaise. For the first time in my life, I got to experience what it really means to be one with a crowd, one with a cause, one with all. We were one, one voice, one people, in communion, not gathered to express anger, or hatred, but to express love, and compassion. As most yoga practitioners know, the meaning of term “yoga” is “to join”, “to unite”, to be one with the universe. On January 7th, just like with many others throughout the world that day, I believe I have taken one step further towards understanding the meaning of what yoga is. That day, in the midst of horror, anger, and grief, the lotus of compassion and of love managed to flourish. People gathered and voiced one song of love, and compassion in unison, united, and strong. May this lotus keep growing and flourishing in our hearts. Read next >> why we are all charlie