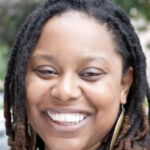 It’s an unassuming building near the corner of 21st. As we walked down the long corridor to the restaurant, the urban sprawl of the Mission faded into the background, forgotten as the hallway led us into a beautiful rustic space lined with fresh flowers. It was, quite literally, the light at the end of the tunnel. As we walked to the hostess desk, I could hear the buzz of those who were clearly enjoying the ritual of Sunday brunch in San Francisco.

Seated quickly in the outdoor patio area, I took a moment to drink in my surroundings, and suddenly felt as if I was eating in a French courtyard. The restaurant’s patio is sandwiched between two large concrete walls, yet on a warm Sunday morning this in no way detracted from the overall feel of the space, which is filled with natural light. The dÃ©cor is simple and warm, with creeping vines lining the outside wall, and wood and concrete coming together effortlessly in the dining hall. I would later learn from Gayle Pirie, the executive chef and co-owner of the restaurant, that the floors were the original floors of an old movie house in the Mission, bringing a piece of San Francisco history into the space.

First up was a glass of fresh-squeezed organic orange juice and a summer fruit plate.  One sip of the orange juice and I felt as if I had just bitten into a ripe juicy orange, the taste so spectacular that I asked the waitress if this is their own special blend. Her answer was that “it’s just organic.” Organic never tasted so good before. The fruit plate was just as wonderful: a fresh spread of raspberries, blueberries and strawberries complemented by cream cheese mixed with almonds. The finishing touch was a drizzle of balsamic syrup that brought out the sweetness of the berries. It was a light and refreshing taste of summer.

My husband and I ordered a sample of things to share. Foreign Cinema offers an “Urban Picnic”””a menu of fruit, salad marked with seasonable items from local growers, and its own house made “Pop Tarts.” With only the two of us, we decided to share an entrÃ©e, the Late Summer Champagne Omelet made from organic eggs and with chanterelles and fontina. The omelet came with a side of Yukon potatoes, fried in peanut oil. I tasted the omelet, garnished with edible flowers, and found the flavors to be pure, with each ingredient coming together to form a medley for my palette. Next, I sampled the potatoes and was intrigued with how they are crisp and crunchy on the outside, but light and soft on the inside. I finished up with a quick bite of the edible flowers. Having never had anything like it before, we agree that we will be back for more.

After this late-morning feast, I was thinking of how I can’t take another bite when the waitress appeared to ask if we would like a little dessert. When I asked for something light, she suggested the Granitas, a chilly treat of three different fresh fruit juices poured over shaved ice served in a martini glass. How can I resist? My husband gave me a daunting look, but when the glass was set in front of us””piled high with sweetness and sporting two spoons””we both dug in. With a mix of flavors, including tart lemon, sweet berry and tropical mango, this sweet desert was a light ending to a perfect brunch, and the perfect treat on a warm day.

After eating what seemed to be a day’s worth of food, I was surprised to find when I got up from the table that I felt completely light. This is what the owners of Foreign Cinema aspire to””food that leaves you feeling nourished, not heavy. I will be back for more of Foreign Cinema’s nourishing food. With its ever-changing menu that is based on fresh and sustaining ingredients, I can’t wait to go back for another feast. Next time it will be for dinner; that way I can enjoy another unique experience over dinner and a movie.