the rise of eco-fashion

The main difference between Bollywood Theater and other Indian restaurants is that chef Troy MacLarty specializes in Indian street snacks. He learned to make street foods during his travels in India.

Some of these street foods are pretty hard to find in the US. Most Indian restaurants don’t offer bhel puri, a snack mix of potatoes, vegetables, cilantro, peanuts and puffed rice served with chutney. Nor can you usually find pav bhaji, a combination of vegetables and buttered rolls that’s a favorite among mill workers in Mumbai.

Bollywood Theater is the perfect place to come with a few friends and order a big spread of street foods and sides to share. While the restaurant does serve meat, the menu is more vegetarian than not. In addition to the usual suspects like samosas — which are excellent — you’ll also find beets roasted with curry leaves in coconut milk and julienned okra fried with lime and chili peppers. In a typical Portland switch, the saag paneer is made with braised kale rather than spinach.

If you like your food hot, try some of the house-made pepper sauce or whole Indian peppers and keep that water glass filled! Bollywood Theater sells authentic Indian drinks like Kingfisher beer, yogurt-based lassis, and ginger-lime soda. 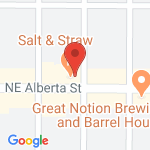