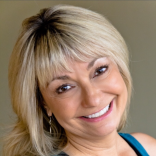 yoga and the performing arts

As I started to practice yoga, I came to realize the positive impact it had on my performances as a singer and actor. I could sing longer lines with less effort because of my increased breath capabilities. I could do more physical things onstage without injury because of this new found strength. This discovery led me to interview two talented performers who are also yoga teachers – Krysta Mellon and Robin Bennett. I enjoyed getting their feedback on how they feel yoga is a valuable tool for performers.

Krysta Mellon is an opera singer who came to yoga as a music student looking to complement her performance. She realized the balance and wellbeing that practice and mindfulness can bring, mentally, physically and spiritually. Robin Bennett is an actor and director. Robin studied theatre with the British American Drama Academy and the Juilliard School and has been teaching yoga for over 15 years.

What does yoga give you as a performer?

Krysta Mellon: Coming from an athletic background, my yoga practice really helped me to stay grounded and avoid the tension and tightness I sometimes experienced. I knew that I needed to stay present, feel my feet, almost like mountain pose, tadasana. Feel my breath. Those deep low belly breaths. That was always really good for me. Basically like the practice, thinking about the breath. For me, singing is breath.

Robin Bennett: The nice thing with yoga is that it allows you to breathe and then, with breath comes a lot of calm. It allows you to just relax and kind of get your head out of your arse and not “act”. One of the great things with acting, and being able to act, is not act. Just to be there. I think that yoga does help you to do that. It allows you to breathe, center and be honest with yourself. Very much so in the moment. When you are in a yoga practice, unless you’re really bored and thinking about your mortgage and stuff like that, in which case you’re not really in the practice, if you’re in the practice fully, you are totally in the moment.

Does yoga give you tools that you can use onstage?

Krysta Mellon: I really like to think of the diaphragm as an accordion. You’re taking that expansive breath in and then you’re letting it slowly, contracting on the exhale, so for me singing is like a sigh. It’s sighing and letting that sound, although you’re thinking of the notes and the technique or the shape of the mouth and lips, I think it can all be helpful. Ujjayi breathing or pranayama. You know at the beginning of Moksha how we do the arms up? That for me can be really helpful because you’re getting the space in through the intercostals and you’re lengthening. Not only lengthening physically through your torso, through your body and where you’re breathing from, but you’re lengthening and slowing down the breath. It’s really centering and grounding. It taught me non-reactive grounding and then choosing every movement. I think the mindfulness and the breath work is priceless.

Robin Bennett: Generally with the breath, comes voice so you can breathe properly. You can project your voice easily without strain. Again, you can calm your mind because as you breathe you’re getting more oxygen into the brain. One of the great things with yoga is even though you can be in your fifties or your sixties you can do physically movements that even a 20 year old could have trouble with. That can provide some very interesting stuff onstage because you can add that in as part of your tool box.

How does yoga help with your breathing while performing, is there a similarity between practicing and performing?

Krysta Mellon: It’s more about tapping into feeling your pelvic floor and your low belly. That’s where I find focusing on long exhales, slowing down the breath, can be really powerful. The alternate nostril breathing can be really helpful to ground and focus. It can really help more so mentally. I think counting the breath for me, like pranayama and lengthening – taking an inhale for three, exhaling for three. Then, moving up to four and four to build the stamina to be able to sing longer phrases. When I’m getting into singing French and the lines are really long. So depending on the style of music, yes.

Robin Bennett: I think singing is more freeing in a way because you’re projecting the voice. With yoga, you’re not projecting your voice. You’re singing but you’re singing within your body. It’s an engineering principle of rigidity in the core to allow you to do many things. It has to with ujjayi breath and creating the bandhas. It’s really all about bandhas whereas singing is not about bandhas.

Is there an optimal breathing technique for a performer?

Robin Bennett: There’s ujjayi breath which we practice on a general basis. Kapalabhati breathing which is an enforced artificial breath exercise is generally done at the end of a practice. With ujjayi breath you are creating the bandhas – you have mula bandha and uddiyana bandha. You’re drawing in from the pelvic floor and the muscles of the levator ani and the diaphragm to create and then engage the muscles of the abdominal core. To create that column of strength that allows you to give your full breath but also allows you to be very strong in the core. I worked with Leslie Kaminoff and Amy Matthews who wrote the yoga anatomy books. Leslie is all about the bandhas and all about breath. As an engineer, from an engineering perspective, it’s absolutely what creates the strength in your body and the ability to do great, amazing things. Yoga is really all about the core strength and about the breathing.

Does that apply itself to theatre? Yes and no. You get the diaphragmatic breath so you engage the core but from what I feel onstage, you don’t engage mula bandha. You really need to push off and you don’t want that rigidity in the core because you’re not about to do something very physical. You actually need to relax the belly so you can’t even really engage uddiyana bandha because you need to let the belly relax, same as singing and that actually gives you more breathe. It’s more easily accessible to draw the diaphragm down that way.

Krysta Mellon: When I come out of practicing, or even just singing for fun or during a show, I feel the same as when I come out of a yoga class. I feel so full. My heart is so full and I feel like I could float. It’s like a high. I get high off of breath work. Off yoga. To me it’s all breath work. Singing. Yoga. It’s all back to breath. It’s really incredible.