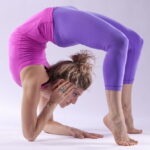 I attempted my first headstand today after surviving a disease which pummeled me, left me paralyzed, hospitalized for three months, and knocking at death’s accommodating doorstep. My feet slid up the wall like an uncontrollable two-year-old, my shoulders trembled and sagged, and my breath felt short. If I were one of my students I’d advise them to slowly dismount and call it a day. Which I did.

I’m in the realm now of, “I wonder what my body will do today?” Where is the weakness pitted; is it in my arms, my trembly, gelatinous legs, or is it where I fear to admit it most – in my mind? I slowly creep my legs back down feeling completely humbled, albeit defeated, and saddened to now live in a body which once soared so effortlessly crumble in a pile on my shag carpet. But of course despite the trash-talking I hurriedly escape to, I also felt a great defiant wave of rock star confidence in having the courage to try. After all, how many times do we get the opportunity to completely relearn and engage in our practice as if almost for the first time? I was in truth stronger than I’d expected to be, and dang, I had been through a lot!

On February 26th, 2016 I experienced a strange tingling in my toes which over the course of two days led to complete body paralysis. After an onslaught of tests; an MRI, lumbar puncture, blood tests, and a nifty machine that zapped the nerves for a response (EMG); it was declared that I had a rare autoimmune disease known as Guillian-Barre Syndrome (GBS). GBS attacks the protective myelin sheath lining nerves, which permeate the entire body, eating away at it like a hungry pubescent teenager. These nerves, of course, run through our muscle, enabling us humans to move, to swallow, to blink.The doc’s had no idea how I’d contracted it since the disease usually occurred with recent viral or bacterial infections, a flu shot, or exposure to the Zika virus. All of which didn’t apply to me. I was as healthy as a trapeze flyer one day, and the next rendered completely immobile.

My case was severe, the disease soon attacked the nerves controlling my throat and lungs. I was intubated, and after a bout with pneumonia, a tracheotomy was performed to prevent further infection where an opening was surgically created in my windpipe and breathing tube inserted to provide a safer airway and remove secretions from my lungs. I wasn’t able to fully breathe or swallow on my own until many weeks later. My weight dropped to 90 pounds. I couldn’t walk, move, or communicate but through a letter board which I ‘pointed to’ with eye movement. To my 1 1/2-year old son I looked like a wiry octopus, a terrible Halloween prank trying to impersonate his mother. Immobile and unable to breathe on my own I had to rely completely on others around me. Excruciating pain came to me with the most minute touch. Tubes emerged from my mouth, my nose, my belly, and arms, keeping me alive and fed. Agony took up residence in my body. My muscles were so lax I dislocated a rib from nurses moving me. It’s hard to fathom both being completely numb and in excruciating pain with the slightest movement at the same time. All the while I never lost consciousness, never checked out. Time ticked on, second by second. I lived in each moment and clung to it like a cat hanging out a 10 story window.

Every bit of knowledge I absorbed through my 10 plus years of practicing and teaching yoga came to my aid now, ushering me from the depths of my fear, and toward my strength. After the asanas come the control of our prana or breath (pranayama), a deeper awareness of our senses (pratyahara), and a cultivation of our inner perceptual awareness (dharana). The deeper realms and chasms beyond this body we inhabit. Those places became my playground now. Every moment was a wobbly meditation to keep myself fully present, riding that kamikaze line, staying hopeful that I would again breathe on my own and move my limbs. My field of vision narrowed and I pulled a chair up in my mind to the observer of that golden moment that held eternity in its palm and I stayed there until the breath became my own again and not that of a machine.

As humans, we long for freedom from fear, from the strings that hold us back and build luxurious temples of illusions. We get caught up in the fear of not performing, not living up to expectations both of ourselves and of others. What follows fear is a shadow that hides our own unique individual potential, limiting us to a dream of “possibility”. Until you can LET GO of that fear, accept yourself as magnificent, powerful, and capable of anything, you live in the shackles of a body stuck immobile like mine. I did the only thing I could. I allowed myself to surrender, become an observer of the crystallized second, to awaken to the welcome mat of events unfolding. You never know your own strength until it comes knocking dutifully at your door.

There are treasures buried underneath it all. I was multi-generational. I was an old woman immobile and decaying, my entire body shed layers of snake-like skin. I was a small child soiling her bed and calling desperately for her mother. And I was me: strong when I could be and shattered all at the same time. I’m a firm believer that until we fall apart, let in the immenseness of our despair, look it bravely in the face as if to say, “This is happening, and it’s shit.” Then we can place a hand on our soul and encourage ourselves to move on. To pick up the pieces and move toward the light. I allowed myself those moments. Then I’d scrape myself together and carry on. I saw inspiration all around me: friends played music, plastered floor-to-ceiling images that made my heart soar, my extensive family arrived at my bedside, and my husband brought my son every single day. Their love made me whole again, their strength in the face of my weakness kept my spirit charging as my nerves slowly repaired the damage done.

Despite the severity of my illness I never lost sight of the overwhelming gratitude I felt for the undeniable possibility that I would recover. My body is chipping away at its deep frailty. I feel like a terra cotta pot covered in mud and left out in the sun; slowly that outer layer dries out and sloughs off. Though I know that “outer layer” is much deeper, potentially even much more fathomless that I care to admit. I spoke words after 2 months of silence. My nerves eventually regenerated and came to a truce. Movement slowly and painstakingly came back, one finger and limb at a time. I had to learn how to walk all over again and teach my body what it already had known.

So today I did a headstand, against the wall, 6 months after not being able to move. I felt strong, I felt weak. My body feels like it’s coming back to me so rapidly, yet I wonder will I ever regain the feeling in my toes. Will the nerves in my face repair so my smile will look like me? Or will these just be the scars I wear, the lingering effects that will make me always remember, like the trachea scar in the center of my neck shouting, “I’m a survivor!” I slip and grasp at beginning the process of healing at a deeper, less physical level. I seek patience as I grow into a different version of “me” and wonder if the old me and new one would recognise each other in a room. I’m dismantling how I perceive myself. What previously defined me as I morph that into the deeper tapestry of who I really am, body imagery aside. The asanas are allowing me a gateway. Not just to empowerment through strength but allowing me the courage to SIT with myself. To come back home to myself. To have the hearty guts to process and disassemble one by one the magnitudinous chapters of my experience.

Yoga in all its vastness is giving me the tools to weed through the chasms of gunk I’m storing and clear the muck out. The union of yoga occasionally slaps us in the face like a best friend, both brutally honest and sweet, and forces us to deal with confronting reality. At the end of the day I remember my vastness. I’ve given myself the hugest high-five in history for pulling off a supported headstand and for, well, keeping it together 23 hours of the day! Patience and acceptance are holding hands at my house tonight.

Read next >> 20 attributes of effective meditation