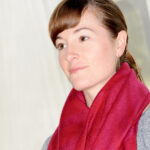 “We are like islands in the sea, separate on the surface but connected in the deep.”

For 2 years I have been teaching a weekly yoga class at Alameda County’s Juvenile Hall in the maximum security unit for youth ages 15-18. I often can’t help but wonder if what I’m teaching is ever really impacting anyone.

I have to remind myself I’m practicing karma yoga (do your work without attachment to the fruits of your labor) and that if I’m not part of the solution I’m part of the problem.

After being in a rut for a few months I decided to try something new. I created a 6 week challenge and invited 6 young men to participate. It involved going to yoga each week for 6 weeks without getting a single warning. Warnings are given if you aren’t participating, are disrespecting others, or talking out of turn.

If one of them made it through the six weeks they won Russell Simmon’s book, “Do You: 12 Laws to Access the Power in You to Achieve Happiness and Success”.

I was warned about the violent and manipulative tendencies of one of the young men I had selected who was known to get warnings regularly and often showed no interest in participating or respecting others or myself. I talked to him directly after class one day and reminded him I see potential in him that he may not be seeing in himself. The next week his good behavior (true self) turned on like flipping a switch.

He ended up winning the 6 week challenge, received a ‘student of the week’ certificate from his school teacher, and was accepted into our recent daylong yoga retreat. He even asked if he could lead the students in a discussion around one of the topics from the book.

At the start of the training he mentioned he was told he had compulsive behavior and that’s why ‘I’m crazy’.He set his intention that morning for self control and successfully completed a day full of yoga, meditation, breathing exercises, mindful art projects, and community building.

We also allowed some time for fun activities like the ‘pose race game’. Earlier in the day they were asked to memorize yoga poses and their names in both english and sanskrit. Later, during the game, whoever can perform them quickly and correctly gets a point.

After being fully engaged in each activity throughout the day, he also won the pose race game, and when we closed the day with a ritual of sharing an appreciation with the group he openly shared his thoughts.

Among other things he also took a moment to share how he appreciated my consistent reminders of his true potential and that I made him feel like even in a place like Juvenile Hall you can still feel a sense of family. I was so deeply touched by his words.

Due to our differences in gender, age, race, and socioeconomic status I often feel society tries to teach both him and I that we are too different to be able to relate, respect, and trust one another – let alone consider someone like family.

He confirms my faith in the potency of yoga and that a few sincere words offered with love are never meaningless or forgotten. I sometimes get overwhelmed by the amount of change that needs to happen in order to bring our communities closer towards social justice, but undoubtedly if we could all learn to consider one another as family we’d be a whole lot closer!