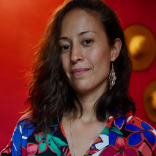 sense of home through self

Dust was everywhere; outside, inside, over the furniture, on their clothes, on their feet. Some even had dust on their brown cheeks under their elongated eyes. How should I start? Should we start sitting or standing?

I wrote the word on the white board: Y O G A. We were surrounded by school desks, the teacher’s bed, a table stove, bags of flour and food cans. We cleared some space and sat on the floor in a circle. We put our hands over our ribs and began to breathe.

There are no yoga pants in this class, only the traditional full length skirts with vibrant colors and flowery prints. And some pants worn by the few boys who attend school. “I’m going to teach you yoga today,” I said to the nine girls and three boys. “Yoga!”, one of the boys exclaimed as if he knew what I was talking about. They didn’t know what yoga was. I pointed to India on a map in one of their books and tried to explain what yoga was. Only  one of the girls have their mother tongue as Spanish; for the rest it’s Tarahumara.

I decided not to invest much energy on words and began to move. First, star and rocket jumps. A solar system illustration on the green wall helped me explained what a rocket was, well kind of. Then, sun salutations, and we began to move as giraffes, lizards, snakes, downward dogs, frogs and more. While we were moving through the series, I began to wonder if they had any animals in their community that could become part of the sun salutations? Or any traditional object that we could turn into a yoga pose?

The Tarahumara, or Raramuri as they call themselves, live in the Copper Canyon in the southwestern part of the state of Chihuahua. The name ”˜raramuri’ means “the light-footed one”, and indeed they are known for their running abilities. They live in very rugged land and foot travel is usually the only option for getting from one place to another. The kids have to walk at least one hour to get to school, and only a few of them own a pair of sandals. The low attendance is due to the long distances. Some parents’ lack of interest in education has forced the principal to offer the option to stay over during the weekdays. Resources, however, are scarce and the kids have been sleeping on the floor while they wait for money to buy wood to build beds.

Balance poses were the hardest at first, but once I began to emphasize the importance of breathing they were able to stay in tree pose or the plane (Warrior III) which took more time to explain the actual object than the pose itself. Since there is no electricity I couldn’t play music, but their laughs became one of the best records ever. Fifteen minutes before, I was a complete stranger; a foreigner in my own country. Now, we were all playing in crow pose, headstand and other poses that they just began to create. It felt as if their bodies were ready for these movements.

Then we did some partner poses. Their eyes lit up as they tried to lift their legs in double boat (navasana). They chuckled on the floor after their double plank collapsed and lay upside down after trying some other poses with their classmates. I’ve been teaching kids for a long time, even though that’s not my career, but every time I have the opportunity to be in a classroom, it’s astounding once they begin to move and emanate a sense of empowerment that trespasses all the categories that identify them. They are no longer kids living in poverty or kids being bullied in a third world environment. They are just themselves.

Kids Yoga has been promoted as the ultimate solution to counter the pressures children can face in our fast-paced world. Increasingly, more people praise how yoga fosters different values and improves the overall well-being of kids. However, not many children have access or the means to afford classes at a studio. In addition, there’s still a long way for yoga to become part of a schools’ curriculum. In some countries, like the U.S., at least it can be found in some physical education or after-school programs. The reality, however, is that we, as a society, are still not ready to recognize the impact yoga can have on kids due to various beliefs and misconceptions.

A few years ago, I was teaching a creative writing workshop at a junior high school in ZapotitlÃ¡n Palmas, a small rural community located in the southern state of Oaxaca. Getting them to write or read required a ridiculous amount of energy. Thus I began to incorporate some yoga moves at the beginning of the class, and the impact on the teenagers’ attitude was incredible. Not only did they develop more body awareness, but their writing, especially the depth of it, became clear, loud and powerful.

On a regular basis, I teach kids yoga in a small studio in Monterrey, one of Mexico’s wealthiest cities. You could say they have everything compared to other environments, but I haven’t found a big difference between the various groups. In fact, with the kids at El Carrizal I had one of the best savasanas I can remember. They all lied down, put their hands on their belly and just stopped chatting. I guided them on a journey where we all could feel happy and relaxed. They were able to choose a forest, the river, a candy house, any destination they wanted to go. You could see on their faces, with their pronounced cheeks getting closer to their closed eyes, that they were enjoying the ride.

I have to confess I spaced out for a bit during the visualization. I couldn’t stop looking at them, their smiles, their relaxed bodies”¦they were the first kids I’ve seen who completely surrendered to the earth. They let go and trusted the moment. It suddenly felt, at least for a bit, that we were all doing what we were meant to do.

Throughout these years, I’ve been witnessing the impact of yoga across different economic scenarios. Every town is different even though they all face the same problems that haunt Mexico. At the end of every experience, I keep wondering how many kids who face such a harsh reality, according to us, are so centered and connected to themselves?

I don’t consider myself an advocate of yoga, but more an advocate of movement. For kids, any kid, moving is universal and one of the best tools in which to protect his or her essence. Once someone has the opportunity to live this process, they can create a whole new world. Is it that maybe we are scared of letting younger generations rebuild our fast-paced world?

Chantal Flores is a freelance journalist, part-time yoga teacher and full-time owner and manager of a studio in Monterrey, Mexico. She has worked in publications in Ghana, Canada, and the US and has traveled to Central America and various parts of Mexico to investigate the impact of immigration and other social issues on kids.

Read next >> the mat and the snot stained shirt