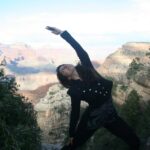 Jenifer Kayhan is living in Amstelveen. Originally she is Armenian…

let go and just chant om with us

A yoga class usually begins and ends by chanting “om”. (Mostly it is 3 times but sometimes it can be nine times then everybody chants in his own rhythm.) If you go to a yoga lesson, without knowing this, then I am sure you will be shocked like me.

At my first yoga practice everybody was sitting on mats in a cross-legged position and waiting for the instructor. We then closed our eyes, as the instructor told us what to do. She said, “We are going to start this session by chanting three times ‘om’.” I didn’t know what was going to happen. First we exhaled fully. Then we inhaled deeply and everybody started om-ing. I was discombobulated that everybody was doing that. The sound was mesmerizing. It felt as if I was in a temple , however,  it was funny also. I was trying to refrain from laughing out loud. It seemed absurd. It wasn’t a temple, it wasn’t a religious ritual then why do we need to chant “om” to start the practice? Ridiculous!

So as you see my first “om” is a complete fiasco. But after two or three classes, I decided to stop pretending but to join chanting. I am not going to say that it was amazing or whatever. But it was relaxing. To breathe out by making the sound om felt really good. As I was in the choir for more than 10 years, it felt like I am singing in the choir again.  However, I became quickly irritated if someone didn’t do it in the right tone or didn’t follow the harmony (began early or ended late.).

Later on, I decided to learn more about om-ing. Om is said to be the sound of universe. It is a vibrational sound that you make by saying “AAAAA-UUUUUUU-MMMM” in totally 4 counts while you are breathing out. Om has actually four parts: A-U-M-(silence). So you start with A (aahhh) which symbolizes the beginning, the universe, then comes U (ooohhh) where your lips come a little bit together. This makes you to maintain the energy of universe. Afterwards you connect your lips fully together with M (mmmm) sound. This sound unites you and the universe. Lastly the silence after the vibration which will bring you awareness and consciousness.

If we go back to my story, what happened to my irritation? Simple. I let it go. Through yoga practices I learned that  it was important to be aware of everything (so hearing the wrong tones and early beginnings or late endings was not wrong), but at the same time, it was important to concentrate on the one and only present time and live that moment with yourself. In the end, that is the goal of yoga. That’s why now I concentrate on my breathing and let go of my voice to make the beautiful sound of “om”. I don’t care if I or others are in the right tone or in the harmony. Chanting “om” is not about that. Likewise yoga is not about doing the asanas perfectly or being in the perfect flow.

Yoga is a journey to yourself by breathing in and breathing out and living that precious present time. Chanting “om” is the beginning of that journey. Keep calm and chant “om”.