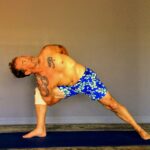 a vacation for transformation

is yoga something, or is it nothing?

Our yoga teacher’s statement could have been an unintended slip; a surprising tangent from her ongoing instructions leading the class in and out of asana. “The pose is not the object, your body is the object,” she said. “The pose helps you get there. Yoga is what happens along the way.”

Along the way, the mind improves too: enhanced concentration, improved relaxation, easier relinquishment – the ”˜letting go’ – and an heightened awareness of what’s important. A result of these differences is a changed person.

I’ve directly experienced yoga’s positive changes. My improved flexibility and balance are specific and objective measures I can easily demonstrate to anyone. The other aspects are subjective; I cannot qualitatively demonstrate quietness, relinquishment, awareness or better discernment.

What I’ve learned along the way to any pose though, is that yoga is not ability, it’s a perspective and deeper awareness. When I hold up the mirror of self-awareness, it tells me that I am becoming fluid and open to change.

But my practice, two and a half years in the making, has spoken directly to me and I know the benefits. If my practice could talk, it would tell me that since I started yoga, my mindset is more agile, I’ve learned a new way of looking at life, and I have readily adapted to changes, including living in a new state, working new jobs and aiming for new goals.

The ability to adapt to change was the centerpiece of a best seller in 1998 called, Who Moved my Cheese.* The premise was that people with mental flexibility and the ability to adapt will have important skills in the new economy – skills that will be valuable. And while most casual observers of yoga might think yoga is the demonstration of an impressive pose or a group of people chanting and meditating, is that really yoga, or is it something else?

A late night skit on CBS’s Letterman show that I’ve seen makes this point in another way.

One installment of the skit showed a woman wearing a swim suit and a metal belt. She held a large grinder, and on cue held the grinder’s spinning stone against the metal of her belt as an explosion of sparks flew up and out.

For 10-seconds, the band played upbeat music during the act. When sparks and music stopped, Dave Letterman and band-leader Paul Shaffer discussed what they saw, and whether it was something, or nothing. In this skit they called, “the grinder girl,” they agreed that it was something.

I wonder how they would look at an ordinary yoga practitioner. Perhaps the band would begin and while the curtain slowly rose, “the yoga guy” would take 10-seconds to demonstrate a common pose. Dave and Paul would evaluate the act and pronounce their ruling.

If they thought the yoga guy doing an ordinary yoga pose was something, they would only be partly correct. If their opinion was that “the yoga guy’s” pose was nothing, that wouldn’t surprise me, nor would it bother me, for I know that yoga is what happens along the way and that yoga’s transformational work, like the illusive cheese, is something that will not be televised.