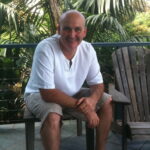 Adam Guthrie is the founder of ifeelgood.com.au an online Whole…

song of the new earth

Finely chop half an onion.

Grate half a carrot.

Grate half a zucchini.

Break one head of broccoli into small florets.

Finely chop one handful of parsley.

Cut four bell peppers/capsicums in half and remove the seeds.

Heat a frying pan. Add one tablespoon of olive oil. (Use a dash of water instead if you prefer to avoid oil)

Add one teaspoon of cumin seeds and cook until they pop. Add the chopped onion and saute for one minute.

Add salt and pepper. Add the chopped parsley Place the capsicum halves on a baking tray.

Place the tray in the oven and bake for 20 minutes at 200 degrees celsius. Remove from the oven, serve and enjoy.

For more healthy recipes from I FEEL GOOD: ifeelgood.com.au/vegan-meal-plans