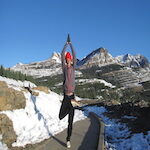 the road to bhakti…the autobahn

“”¦the face of God will appear, with his serpent eyes of obsidian”¦” – Bob Dylan (Romance in Durango)

There are things in life that remain printed in the memory, in the cell’s memory”¦feelings, situations, places”¦there’s no need to try and remember them, no effort required to bring them back, they become firmly ingrained in our being and they mildly surface or surge at times”¦naturally.

I must confess that by now I’m a person particularly attracted to nature and its multi faced aspects; I’m attracted by the solitude of the natural, uncontaminated and vast spaces more than by the overpopulated and chaotic cities and man-made arts or artifacts, I’m actually wondering if I’ve become some sort of a misanthrope, favoring trees, birdsongs and fluffy clouds versus sexy sport-cars, museums or fancy restaurants. I’m still attracted by human relations, that I seek; I’m attracted by science, by the intriguing effects of technology on human society and affairs, but”¦alas! Nature is what mesmerizes me, catches my heart and brings me Home.

I was in Connemara, in the West of Ireland, a wild and inspiring piece of this Earth. In spite of a hiking ban of the surroundings because of a “Mouth and Foot” epidemic, I decided to go for a hike of the Twelve Pins, and in spite of my sort of “Hikikomori” attitude (I actually don’t stay indoors and don’t despise human kind), I’m indeed a law abider, I went in the fields in a furtive way because of the ban, feeling like a bandit, checking around if someone was spotting me. Once out of sight I really started to enjoy the trek and when on top of one of the Pins I had a blast.

The view was breathtaking, I could see the Ocean, the fiords, the black pits, the moors, the green grazing pastures dotted by white fluffy sheep, lakes and swamps and rocks, boulders and blue sky, I thought this was what must have been at the beginning of Creation, I was overwhelmed, raptured, I had an intense moment resembling a mystical experience”¦there and then “I saw the Face of God” in all its glorious Magnificence.

It was not exactly the first time, I saw that face before and I saw it after, for fleeting moments or longer times, just not so blatant though, like in that Connemara day. I saw it in babies, in the innocent expression of the kids in India, in the unconditional love of mothers, in the paintings of Van Gogh, in the lines of Kabir, in the tenderness of the mum lioness and in the eyes of the fragile doe.

I saw it in the eyes of my friends, I saw it in the golden hues of the ripening wheat, I saw it in the phantasmagoric colors of the coral reefs, I saw it in the flÃ¨che of the Christian churches, of the Muslim Mosques, of the Buddhist Stupas and Hindu temples”¦I saw it and I see it everyday”¦sometimes I miss it, sometimes I don’t, but there it is, smiling, shining, smirking, elusive or glitzy, in the waxing moon or in the trembling outline of the village steeple,”¦but it’s in Nature that’s glittering, snazzy and soul-catching, is in the jungle where I live that’s omni-present, it may not be so glaring and honking like that day in the Connemara wilderness”¦or perhaps I just grew up, perhaps I’m more calm, receptive and less prone to exaltation”¦, but it’s always around and about, the Face of God is everywhere.

Read next >> the living room