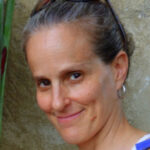 Amit Janco, a travel and cultural writer, editor, blogger and…

Let’s say you’re a yoga hound. You’ve tried Kundalini, Bikram, Restorative, and Viniyoga. Perhaps you’ve traded in your Zumba for Yogadance, or you’ve learned to fly high with Acro Yoga. You’re a fan of hotel yoga, spent one summer at a silent yoga retreat, and froze your toes last month while practicing outdoor Snowgasana. Best of all, your chakras are finally tuned up. So what’s missing?

Well, if you’re a serious asana addict AND a dog lover, why not fold yourself into Adho Mukha Svanasana with a svana by your side? That’s right, do the downward dog WITH your dog.

Before you write it off as another zany or newfangled yoga-fusion trend, let me share my story.

I recently spent a week dog-sitting my two friends’ pets; an aging retriever named Abelard and his daughter Heloise. Both very active and high-maintenance pooches, they were ready to leap or split at the first sniff of another dog, cat or rooster. But once the dogs had their fill of food and fun, and fatigue set into my body, I was ready for them to downshift”¦ into repose.

That’s when I first put my scheme into action, luring them into the bedroom where my yoga mat lay unfurled on the floor; I had a sneaking suspicion that my practice would rub off on them. Even if it didn’t, I hoped that they’d rest long enough for me to wrap up my stretches.

On the first day, the duo gazed at me from afar; this one panting with his pink tongue hanging out, that one’s head cocked and slightly askew. By the second day, they seemed to have gotten the memo. What’s more, they were ready to join in.

I let them sidle up to me, even giving the retriever a wide enough berth to maneuver himself under my downward dog. Let’s face it, I was inverted so what choice did I really have? He then settled himself across the top of the mat, leaving me to scoot further down and wrap up my practice almost entirely on the floor.

Granted, it’s not for everyone, having a pooch lick your face while you’re in a headstand. You have to be willing to share your mat – or, better yet, give it up – to make the most of your dog-partnered poses.

But there are upsides:

Shifting into child’s pose, with your dog nestling herself against your backside.

Inhaling into high cobra or upward-facing dog, while your dog sits erect nearby.

Moving into pigeon, then plank pose, when your dog might choose to walk circles around you.

Or ending in savasana – with your dog pawing at your stomach, reminding you to breathe deeply.

You might even come to think of your dog as a lovable and movable prop.