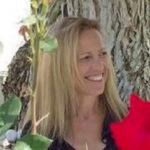 Pamela Gerber is a college instructor of English, a yoga…

practicing with your pooch

surviving darkness in light of a yoga life

I was a bookish girl from an early age, always about with one under my nose in my Long Island suburb. That early reading passion eventually turned to a career in teaching high school and college English. So it’s no wonder that the first encounter with yoga was through a pocket sized hand book with pictures of a woman in leotard and tights performing various poses. I imitated those pictures as best I could but remember feeling particularly challenged and then rewarded when I could perform a cosmic-sounding sequence called sun salutations. I was fifteen then.

A few years later in college, I attended a Hatha yoga class. I recall blissing in magic yoga calm (shanti) at the end of 45 minutes when the instructor would lead us through a visualization of our bodies, part by part, in meditation, relaxing each into the ground in quiet motionlessnes: Corpse Pose. During that class, I felt both the growing ease of asana and the stubborn strain of focused calm. It took many classes for me to absorb my mind as well as my body into relaxation without drifting to a hundred thoughts. But the yield of practice was that peace of a quieted mind, even if only mere minutes.

After that class, I came to yoga again a class here and there, one at which I severely sprained my back forcing it into a wheel pose, far too advanced for my inflexible spine. An athletic 26 year-old then, I subscribed to the no pain, no gain theory of exercise; one that, ironically, led to long-term pain. Years later I read about yoga breathing and meditation, again struggling with a teeming brain and competitive personality; it was agony to sit still and be quiet.

It wasn’t until age 49 that I took another class at the local recreation center. Perhaps it was the combination of a good teacher and the wisdom to finally respect my body and limits, but this class was perfect. It was just before my 50th birthday. My 50th year was a soul searching one. Having been for years the perennial volunteer for my family and community and my daughters being old enough to survive a week with their father, I wanted to do something special for my benchmark birthday, something for myself by myself.


I found that something in a Costa Rica yoga retreat courtesy of my yoga instructor. It was a week that changed my life, catapulting me into a deeply committed daily practice. I grew to love yoga, my body and the world. It was my sanity and medicine over the next four years through the throes of menopause, severe marital strife, financial collapse and eventual loss of my career, which landed me in jail for nearly 30 days””the worst time of my life. No, this is not the clichÃ©d ‘yoga saved my life’ story while I suffered unbearable injustice and humiliation, not exactly. But I abruptly severed my middle class suburban, soccer mom to two teenagers, professional and community life to live among the poor, disenfranchised, drug addled unfortunates. I wasn’t afraid for being out of place. In fact, I felt a certain unspoken camaraderie among the 40 mostly young women in the “tank”. No, the cruel deputies were the most oppressive, second only to the dankness of living behind stone walls and iron bars with no natural light. The constant noise and flickering fluorescent lighting in cramped quarters without privacy were debilitating but little compared to the dehumanizing guards who constantly shouted insults in hatred and disgust.

My survival was in reading a lot, learning to close my eyes and listen to what could not be taken from me””my own thoughts and beliefs””practicing yoga, and eventually flipping the switch from hatred to compassion for my jailers. Yoga taught me the strength and equanimity to not merely bear but transform the excruciating anguish. A practice was not easy in confinement, however. Yoga was like contraband because it required violating rules against being barefoot that could land me reprimand. So I would get up at 4 a.m. before the first count call to do yoga barefoot on the filthy, cold cement floor. Later I would sneak a few sun salutations and stretches in the small television rec room unlocked after chores and chow when most inmates went back to sleep around 6:30 a.m. Sometimes I would practice later when inmates were stirring, but the best days down in the hole were on the barbed wire lined rooftop of the jail house, especially the first time after 11 days in the windowless tank.

I cried feeling the sun. I did yoga. It was glorious; the best yoga of my life despite the dirty asphalt floor and the barbed wire cutting the clouds to pieces. And inmates began to join me, silently. I usually found some partially hidden out-of-the way corner to do my yoga as I did not want to be in the way or too conspicuous. But no matter where or when, I was sure to have curious inmates, mostly novices, follow my movements. I always started with sun salutations. In this pit of despair, I yearned for sun salutations, as if I could beckon the sun to me with willed movement. I reached for the sun beyond the cement walls, iron bars and barbed wire, in my heart, in my outstretched arms atop a high lunge, with eyes closed.

And they followed. Perhaps those whose only real crime was poverty sensed the peace in movement that communicated that strength and equanimity of yoga practice. They seemed to understand that this hypnotic muscle memorized movement, seemingly strange or mystically performed with closed eyes, practiced in stealth, was important and not just to me. I could tell. They joined in wordlessly for a while and then quietly moved on. But some came back the next day, looking for stolen moments of breath and freedom.