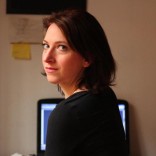 I am a writer, translator, mother, artist's wife and American…

motherhood as the ninth branch of yoga

For the first few years of my practice, yoga was a dance I performed on my mat. It started with led Primary Series, graduated to a Mysore practice, but was something that, once I rolled up my mat, stayed locked up inside till I took up samastitihi again. Just below my level of awareness, there was fear and there was emptiness, something I couldn’t touch. Old traumas that creeped up in the dead of night as panic attacks. My life was divided between on the mat and off the mat.

On the mat I challenged myself and learned my physical strengths went far beyond what I thought they were. I had chosen an Ashtanga school to prove to myself and others that I wasn’t the weakling they thought, that I wasn’t the weakling I thought I was. But the physical asana practice was just the first step. I bailed at headstand, unable to break through the psychological barrier, unable to turn my world upside down.

Although I had specifically sought out Ashtanga Yoga, it was yoga that continued to come to me in waves of intensity through the following years and remained a very physical practice until I discovered I was pregnant.

Pregnancy showed me exactly how divided my body and my mind were. My body had been alien to me nearly my whole life, but I’d never seen the extent until it was reflected back at me. My journey towards wholeness was a journey back to yoga, via meditation, as I started practicing hypnobirthing in preparation for my daughter’s birth. My pregnancy became a time of reconnection and reconciliation, a time of learning to surrender to that which I could not control.

During labour, I found the space between the thoughts within the space between the contractions. The space of nothingness, but not something frighteningly empty, just stillness. An empty stillness capable of housing the emptiness we feel within our existence. A blank canvas that we can fill with our heartbreaks and traumas. A sort of treasure chest to house all our suffering instead of projecting it upon others. I like to think I left my suffering there for a while as I gave birth.

As I attempted to establish a healthy emotional relationship with my daughter, I saw the deep-rooted emotions I still housed within me, and I sought yoga again (or perhaps that’s just another way yoga sought me) as a place of refuge. I gradually learned to allow whatever it was that came up to come up, to sit with it, to say “I hear you. I believe you. I love you.” I learned to cry again, tears born of suffering and tears born of joy.

Motherhood brought yoga off the mat and into my daily life. The lessons of seated meditation and yoga, observing without judgement, holding our emotional traumas in lovingkindness as we do with our toddlers when they skin their knee for the first time. Teaching them that we don’t always have to worry about planning what we will do today, but rest in the awareness of the present moment as we sit at the breakfast table together.

Motherhood taught me to surrender to the outcome I could not control, nor see, and lift my feet off the ground and into the unknown to turn my world upside down. And once my world was turned upside down, I began to feel whole again both on and off the mat.