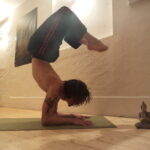 Dan Peppiatt teaches his own blend of flow, core strength…

do yoga and omming really go hand in hand?

I like to question everything about yoga. If I am doing an physical asana I need to know why. I don’t want to be just moving through the motions for the sake of moving. Surely if I just take everything at face value then I can never have a true, deep understanding of it?

I used to love a good Om. For many years, after I had got over the initial embarrassment of making an odd sound at the start and end of class, I positively rejoiced in my OM. I had (and still have) an Om tattoed on my arm and I used to sketch various styles of Om in idle moments. The Om could do no harm in my eyes. Yoga and Omming went hand in glove as far as I was concerned.

Although at first I didn’t have any idea of why I was omming, I just enjoyed the collective bond it offered, the weird spiritualness I felt and it made me feel like a member of a secret club, the equivalent of a yoga masonic handshake.

As time went on I became more educated about the Om, about its origins as the sound of the universe itself being created. How mystics in deep meditation had heard the sound, how even NASA had detected Om like echoes from the big bang, how it is a part of a vibrational language. All very useful knowledge. But as we all come to know, knowledge is not experiential. Knowledge is not understanding.

As Krishnamurti, one of my favourite thinkers commonly described, everything that comes from outside of us is a second-hand truth. The only truth that should guide us comes from deep inside, because we can know that it is pure. It is unpolluted by the hand and intentions of others. Or words to that effect.

So I started to question the Om; interrogating it and probing it. I understood the apparent reasons for doing it and they seemed valid. But far more pertinently, and here is the question that I could not answer: why was I doing it? What significance did it have for me. Who told the first person who started omming that they should be omming? Were they just trying to emulate the sounds that they had heard when meditating and if so why? How did they know they should be omming and why did other people start doing it? To be part of the gang as initiates, because they had heard it was special? How do we know that they got the sound “right” if there is a right.

Like all things, enough people start doing something and the minority become the odd ones. Society loves to alienate people who question and don’t fall into line. But surely that is what yoga is for? Questioning our place in the universe? Gaining a deeper understanding of ourselves? Not just falling into another club.

So my point is not to suggest that you should stop omming. That is a matter solely for you to decide and if I tried to persuade you to stop I would be as narrow-minded as someone who tried to persuade you to do it. My point is that you have a choice. Ignore the history of the Om and ask if it is coming from inside of you. WHY are you doing it? If you are happy with the answer then you will be happy with the Om ( or lack of it!).