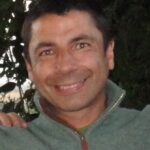 a memory of india – benares

Natarajasana creates a beautiful combination of orange shades in all the chakras. Since this pose pushes the shakti upwards, the Muladhara is devoid of power, but as we ascend through the chakras the power intensifies. At the heart the energy turns red, amplifying passion and love.

When it reaches the third eye it becomes burgundy, giving the practitioner the intense concentration he needs to perform this balancing asana. The strongly focused awareness that this pose generates will help to prepare the pracitioner’s mind for deep states of meditation. In this pose it is clearly evident that consciousness is rooted in the Heart.

The combination of blue and yellow of the aura create a powerful solar side, which is balanced by a male spiritual blue on the right side.

Shiva as Nataraja, the cosmic dancer, symbolizes spiritual virility in the yogi. The image of Nataraja calls us to the recognition of our true Self as the Supreme Consciousness which pervades the whole universe and is literally dancing in every atom. In metaphysics, Nataraja symbolizes the union of the Supreme Spirit (Purusha) with the realm of matter (Prakriti), the wedding of essence with substance in a single all-encompassing Divine Reality.

It is worth considering the possibility that the two concepts are not fundamentally different: after all, if the mind has been destroyed, what entity will remain to perceive an external universe?

In some philosophical stipulations, Lord Shiva is considered to be the totality of both ”˜Being’ and ”˜Non-Being,’ meaning that he is the unadulterated empty space of pure Consciousness which then becomes conscious of its existence, and develops into a living expanded Spirit, which then manifests as the whole realm of matter and encompasses the entire universe.

And yet pure Consciousness, Shiva’s true nature, remains forever as it is: non-dual, changeless and empty.

Nataraja, being the source of the entire universal play, is both ferocious and benign simultaneously. Those who approach him with love and humility receive his sweet blessings, while those who work in opposition to divine truth receive his thunderbolts. He is the creator of war and peace, happiness and sorrow, pain and pleasure; he is the giver of suffering, ignorance, devotion, wisdom, and finally the eternal bliss of God-Realization.

Yet Nataraja himself is beyond all opposites, beyond good and evil, light and darkness. Established in transcendent peace, pain and pleasure are the same to him. In due course, and according to his own sweet will, he will release all beings from their ignorance, and grant Liberation to every soul.

Shiva’s wife, Parvati, is an embodiment of Shakti, the universal power, and dwells as the Kundalini power within each of us. The son of Shiva and Parvati, Lord Ganesha, is the Remover of Obstacles, and abides in the Muladhara chakra, while Shiva lives in the crown chakra, awaiting our discovery when the Sahasrara has fully blossomed into omnipresence.

When Ganesha, in the form of tapas (austerities) and bramacharya (the practice of celibacy), removes the primary obstacle of stagnated sexual energy, the Kundalini then begins to ascend, and eventually it blesses all the chakras, culminating in the blossoming of the crown chakra, where Shakti reunites with Shiva, resulting in the practitioner’s full Enlightenment.