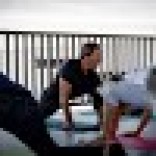 People wonder about the appeal of doing yoga in a hot room. Reasons for hot yoga's popularity are based on individual opinion, but also broad and deeply rooted ideas.

Mircea Eliade, former professor of religion and philosophy at the University of Chicago, wrote that the Indians, in the Rg-Veda, called the practice of using heat and energy in the ascetic effort of Tapas (Yoga using heat). Tapas, he wrote, cleanses the yogi and prepares them for another dimension.

One reason yoga devotees searched for this other dimension was to reach the state of Samadhi, a union or absorption into the Godhead or Brahmin. They did yoga to live longer in order to give themselves more time to work toward the perfection of the self. This illustrates the conundrum that is yoga: on one hand, it's as simple to describe as “self-improvement;” however, Eliade also writes a more complicated description. “The language of yoga comes to us through a semantic polyvalence in which the secrets of the universe are unveiled to seekers.”

In another work, Shamanism: Archaic Techniques of Ecstasy, Eliade traced the history of North American Medicine Men (Indians) and their use of heat during rituals of healing. Peoples of the Americas believed an important spiritual and ritual process took place which reflected the birth-and-death cycle. They used the sweat lodge, a hut, typically dome-shaped, for ritual steam baths as a means of purification. This was a technique for vision seeking and personal transformation. These rituals in the Americas still occur today. American indigenous peoples accept that healing happens during the process of flesh meeting heat in containment and so healing can occur.

In our heated yoga studios, equipped with light dimmers and cooling systems, yogis are learning by experience what these cultures have known for centuries.

WHAT THEY KNEW ABOUT HEATED ENERGY THAT WE ARE LEARNING

Seven years ago, I started hot yoga while living in Hawaii. Tapas taught me to control my breath and pay attention to everything. I noticed that heat and yoga burned away troubles and lit an inner fire that cracked open my heart. I embraced this crackling flame as it brought me to a deeper awareness and a fuller surrender to my self. Drops of sweat from my forehead were my tears, my mat was a sanctuary, and cleansing tapas was the result.

Through the mental and physical reshaping of hot yoga, yogis learn to ignore the heat and move with ease into postures of dis-ease. This focused movement teaches the yogi to ignore that which can be ignored. When the yogi moves into postures of dis-ease with ease and focus, yoga becomes fluid and effortless no matter how hot it is. At the very least, heated energy opens healing possibilities in the body.

THE PROCESS OF TAPAS

When we put ourselves in a position to experience tapas, we first relinquish any sense of control and deliberately let go of everything outside the door of the yoga room. The shaman and the teacher prepare the room and light the fire, but he or she cannot make change happen; only the yogi can open the doors. When they open up and release their sense of control, the process works like sandpaper on wood, slowly whittling away resistance to receive the fire of tapas.

The second step in the ritual is the yogi’s willingness to submit to a common identity. The yogi is nothing more or less than any other member of the community. Teachers and students are the same; each one in their essential identity is a practicing yogi. This is a radical idea of taking everyone back to the beginning, to our roots.

In the third step of tapas, fire becomes the yogi, as it escorts his or her ego to connect with the cosmic Self; gravity and heat are the tools for changes to happen slowly.

If the yogi becomes impatient with the slow pace of change, yoga will one day show them a new awareness where they might question why they are in such a hurry. This leads to insight and the beginning of a new Self-identity. It’s a more connected identity for it reaches in deep to unearth hidden motivations of the ego. In the final step of yoga’s tapas, one’s focus is ritualized and sharpened by asana and focused by mantra. The yogi drops from life anything stealing their inner peace. This is the gift of relinquishment where the yogi is polished in the cleansing fire.

The benefits of tapas in heated energy is truth and truth-force – satyagraha – in practice. From the middle of this tapas and ritual, yogis stand as witnesses to the burning embrace of change, a metamorphosis of brilliant unfolding. We do yoga because we believe it transforms lives. We believe because we’ve experienced it; a habit starts with small steps, each footprint is a cleansing fire that heals and molds hearts and minds.

Take the step into heated energy and find your way to yoga – hot or not – to claim the peace you earn in tapas. With regards to energy, it’s a matter of conduction, where a collection of asanas shape, move and mold whatever and whoever has chosen to be cleansed from the depths of the self.

Gregory Ormson teaches YOGA AND LEATHER: Yoga for Bikers, at Superstition Harley Davidson in Apache Junction, AZ. He's worked as an ordained clergy in the…