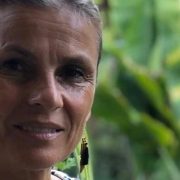 Blandine Gerber Fleury is an author, life support, and mother…

Camel pose, ustrasana, is difficult for me to do. I have enough length in my lower back and side waist to do this back bend. I don’t have much difficulty opening up my chest when I concentrate and my hips and the front of my thighs are open enough after some warm-ups. The difficulty of doing camel pose for me is psychological. I’m scared of doing ustrasana.

When I started practicing yoga, I expected that the poses would be difficult for me. My thinking was that eventually, with persistent and consistent practice, my strength, flexibility and balance would improve such that most poses would be attainable. In general, my expectations were fulfilled. After months of practice, I could do most basic poses to some degree. I made slower progress on poses that had a major strength component but I did make progress. However, I wasn’t prepared for the fact that I wouldn’t be able to do some poses because of psychological limitations.

Ustrasana was one of the first poses that scared me. I had been doing back bends and I found them to be exhilarating. So in class after my teacher demonstrated camel pose, I didn’t have much apprehension in attempting it. I got on my knees, put my hands behind my hips and began the backbend. I was concentrating on not letting my lower back scrunch up when a feeling of fear came over me. I was afraid that I was going to fall even though I was rooting myself into the ground with my lower body.

I gutted it out and came into the full backbend, moving my hands awkwardly to rest on the bottom of my feet. At this point, my chin was still neatly tucked in. The teacher asked those of us who had our hands on our feet to let our heads fall back. When I did this, my throat immediately tightened up. The rest of my body was fine. My lower back wasn’t scrunching and my chest was open but I was very uncomfortable. I was sweating a lot.

I’m told that backbends create a lot of heat and energy but my sweat was a cold sweat. I tried to stay in the pose for a few more breaths but I found that I couldn’t breathe. So I came out of it.

In subsequent tries, I still felt an element of fear while doing ustrasana. I wanted to understand what was behind my fear so I tried to observe my feelings while slowly trying to get into the backbend. I noticed my emotional discomfort started when I began moving backwards. Although it was a controlled movement, I thought I was going to fall.

I’ve fallen a lot in yoga but I was never afraid of falling before doing ustrasana. So maybe it wasn’t just a fear of falling. I tried to think about the other times in yoga when I felt this kind of fear. One of my teachers does an exercise in which we stand with one foot on a rectangular wooden block and the other foot in the air. While we are balancing on the block, she asks us to close our eyes. Within seconds, I’ve fallen off the block.

This exercise shows us how much we use visual cues to keep our balance. While standing on the block, I also noticed that I felt a lot of fear when I closed my eyes. It made me more aware of how much seeing made me feel safe.

In camel pose, my eyes are open but I‘m moving in a direction in which I can’t see. That defies logic. My mind is asking why I would want to do something so dangerous. I think that’s a good question. So the next time I did camel pose, I was thinking about this feeling of insecurity as I moved backwards. I knew I wasn’t going to fall but I still couldn’t trust myself enough to let the feeling go.

I think fear and trust have a lot to do with one another. Outside of the studio, I have a lot of difficulty trusting other people but I never really thought about the issue of trusting myself. I mean really, who can you trust but yourself? But I wasn’t doing it – not on the mat and not outside of the studio. While doing camel pose, I found that fear and trust are not based on logic.

How do you let go and trust yourself? I don’t know. Each time I do camel pose, I try to take that leap of faith and trust myself. Sometimes I do and sometimes I don’t.

yoga as a way to fight fear, depression, and anxiety