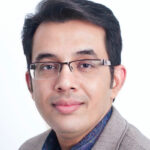 I am a Doctor, and a Radiologist by training. I…

the existential experiment of savasana

Change, they say, is the only constant. Look at yourself and you will find nothing is constant, everything is changing, especially this concept we call “time. ”The most obvious and easy to observe change is the result of rotation of the earth, which leads to the phenomenon of day and night.

Science has found that heavy bodies (earth, sun, and moon) are changing, and so are the atoms and molecules in our bodies. Everything is forever-changing.

Scientists have found that earth and the sun, and all heavenly bodies have a cycle; a cycle of birth and death, which starts with the big bang and expansion, and perhaps ends with enormous contraction, only to start again, with a frequency of billions of years. Even at the microscopic level, we find that there are cycles (water cycle, carbon cycle, and others) of change, some documented and well-studied, and others likely. I think there is a deeper meaning to the phrase “what goes around, comes around”.

What if all the change is happening in cycles? How do we characterize a cycle? Frequency is the measure of the time it takes to complete a cycle. So, time is a medium to express these cycles on a scale. This cyclical change is likely the explanation for reincarnation in Hindu philosophy, a frequency of the soul as it passes through bodies, in a cycle of birth and death.

Now, in our bodies, there are cycles or rhythms. Again the most obvious are awake and sleep cycles, which are physiologically entwined with the day and night cycle, at least for most of us. How amazing is that, when the sun comes out, we get up, the body and mind feel rested and full of energy for a new day. Scientific evidence clearly shows that when this is cycle is disrupted, health is lost and symptoms of disease appear.

The other rhythms in our body are the beating heart and respiration. Heart beats normally with a frequency of 60-100 beats per minute and we breathe with a frequency of 12-16 per minute. Every cell in our bodies perhaps perceives these two very basic and essential rhythms. They are related and interdependent too, in the sense that most causes of increased heart rate lead to increased respiratory rate, and when one is failing, the other tries to compensate.

The physiology of their interdependence is complex. One (the heart beat) is completely automatic (we do not have any control over it), and the other (breathing) is where we can have some control. For example, when we are frustrated or emotionally charged, it is a good idea to take slow deep breaths, which helps the body and mind to calm down, which can also be observed as slower heart rate. Breathing affects heart rate. When we inhale deeply, heartbeat slows, and when we exhale, it picks up.

Yoga has also recognized another rhythm related to the breath, which is known as “nasal cycle”. At any time, the flow of air in one nostril is stronger than the other. This can be observed by exhaling forcefully on the back of the hand.

There is not much scientific evidence on “nasal cycle”, its physiology or significance. But yogic literature is full of reference to this phenomenon, ways to change the dominant flow, its effect on human physiology, and to the balance the two sides for healthy living.

Can you think of any other rhythms in the human body?

Feel free to write a comment below and for more info vedic-healing.com.

Read next >> value of a yoga teacher