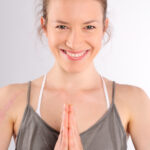 looking at blade runner 2049 for answers

SNT: Accepting All Life – 3 Parallels between yoga and science fiction.

Science fiction is a perfect combination of the scientific and the fictional, the logical and the abstract, the physical and the metaphysical. Yoga brings the union of these complementary polarities.

A unique genre, science fiction creates intricate links and bridges between ideas, concepts, and theories. In the process, it makes us travel in time and space questioning our morality, human values, and our place in the universe. Embarking on a true yoga path, or practicing all 8 limbs of Ashtanga yoga, has the same effect.

A recent science-fiction hit, Blade Runner 2049, is a great example of the above mentioned. Taking place in the near future where “replicants,” androids who are impossible to differentiate from humans, are commonplace and humanity has to reap the fruit of their misdoings while living in a post-apocalyptic world. The film takes viewers on a journey from which you come back a changed person, a spiritual transformation in just 2 hours and 44 minutes!

By referencing the plot, characters and the main concepts of yoga and spirituality, the main question posed by the film,“What Makes Us Human?” can be addressed.

What makes us human?

1. The biological/Functional narrative: On the most obvious level, what makes humans different from the replicants is their flesh and blood while replicants are the artificially created copies.

In the film, the biological narrative is challenged. The story is based on the main character who is searching for an alleged child of a human and a replicant. The idea that the two can conceive a child promises to break out a war and cause chaos, something that should be prevented by terminating the “horrible mistake” or the “miracle,” depending on who’s asked.

What does yoga tell you about your biology or body? Most of the yoga and spiritual traditions say to respect and take care of your body as the functional vehicle that takes you on a spiritual journey of existence. On the other hand, yoga also reminds you that you are not your body but rather the organizing intelligence (consciousness) behind it. Therefore one should not overidentify with the physical existence but look beyond it.

From this perspective, humanity should not be denied to the androids simply because they are made from slightly different building blocks. If it comes to the situation where artificial life develops consciousness and finds ways to reproduce itself through whatever means, human beings should honor that consciousness and provide it with equal rights in this game of life.

2. The social/Relational narrative: On a more complex level, the difference between biologically and artificially-created intelligence is not functional but rather social/relational.

The story behind both the original movie, Blade Runner 1982, and the sequel emphasizes the lack of perceived difference between the human and the replicants: they look like humans, they act like humans, and they make viewers feel as if they were humans too. However, humanity conveniently prefers not to integrate the replicants into the society, denying them equal rights and privileges, insisting on exploiting them, and treating them as objects to be acted upon, not as subjects with their own independent agency and needs.

How does yoga teach you to relate to others? Building on the idea that you’re not your body and eluding to a separate ego, yoga instructs you to adopt a type of ethical code of conduct (outlined in the yamas and niyamas, the first two limbs of Ashtanga yoga) based on the idea of universal consciousness and interconnectedness, eliminating the concepts of “me” versus “other” or “us” versus “them.”

In this context, humans should expand their awareness of the self and extend it to other life [or artificial] forms who show the signs of consciousness, treating every intelligent element with acceptance, understanding, respect, fairness, and humanity. Each of the elements has its purpose and role to play. The role of the stronger one is to take care of the weaker one, for only when working together in this way do they stand a chance to survive and prosper.

This element comes across as the miracle the replicants speak about when they mention the child who came from human and android love. Blade Runner 2049 opens with the main character being sent on a mission to exterminate one of the older models that did not conform. When asked by his victim how it felt to kill one of his own kind, K replies, “I don’t retire my own kind, because we don’t run. I’m one of the older models too,” to which he gets a mysterious comment that later helps to change K’s whole worldview. “…that’s because you haven’t seen a miracle.”

Miracles, or mystical experiences, are an integral part of yoga and other spiritual traditions. They are known for their profound life-changing effects on the lives of those who experienced them. Such experiences can be spontaneous or caused (invited through self-practice or with the help of a spiritual guide), resulting in the subject’s necessity to rethink and reorganize their system of beliefs and values thus changing their behavior and ways of relating to the world from the core.

The film shatters the last obstacle to accepting the androids as the candidates for a decent and meaningful co-existence among the biological species. If the replicants can be spiritual they qualify to enter the kingdom of heaven (as some religious traditions would put it).

Humans have a responsibility and a role to play in order to steer humanity toward a better future and preventing some of the horrors depicted: environmental degradation, loss of species, radioactive pollution, corporate autocracy, harsh living conditions, societal injustice, headhunting for nonconformists, loss of human dignity and meaningful social bonds. Practicing yoga and other mindfulness techniques that expand our consciousness and make us into more humane creatures should be encouraged, practiced, and spread.