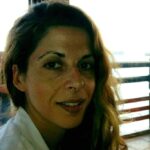 Katerina Vasilopoulou-Spitha is a yoga instructor, a zen meditation practitioner,…

The practice of yoga is not meant to be restricted in understanding our body’s mechanics and in executing often complicated postures (asanas). Apart from being strong and healthy, Patañjali in his Yoga Sutras teaches us to be also virtuous. For it is the first limb of his eightfold (astanga) yoga, the yamas, that introduces us to the practice of self-discipline manifesting thus the deep ethical foundations of his yoga philosophy. This spirit of self-discipline that comprises the practices of non-violence (ahimsa), truthfulness (satya), non-stealing (asteya) and continence (brahmacarya) summarizes the last of the yamas, non-possessiveness or non-greediness (aparigraha). Pattabhi Jois in his Yoga Mala describes aparigraha as the art of ensuring only that which is necessary for maintaining the physical body and avoiding desires that exceed this need. Epicurus’ self-sufficiency But how could we really free ourselves from excessive desires and learn to be self-restrained? As it appears, this is a question that Patañjali leaves rather unanswered. Yet, thousands of years ago the ancient Greek philosopher Epicurus (341–270 BC) seems to have meticulously dealt with that matter and extensively praised in his teachings the virtue of self-sufficiency (autarkeia). In obtaining this good, as Epicurus calls it, a man should learn to be content with little, something that entails the practice of non-greediness and prudence or phronesis, as well as adherence to the principles of a simple life. In effect, what Epicurus advises us is to: • Distinguish our needs and desires in terms of what is necessary and unnecessary for our body’s “natural balance”, namely its good health and survival. In doing so, we should take pleasure in satisfying the natural necessary desires which ensure that equilibrium, such as hunger, thirst, love, friendship and the need for security, and avoid the “vain” or “empty” ones, like for example the desire for wealth and fame, which are limitless and, therefore, difficult to be satisfied, as they are based on a false belief about what we need, causing only anxiety, misery and pain. • Show prudence by examining soberly the causes of every choice and avoidance. It is through this process that requires mindfulness and good use of our judgment and practical reasoning that we are able to perceive reality correctly and make wise decisions. • Practice self-restraint through regular self-reflection and control over our actions and passions. • Live a simple life not in the sense of a strict asceticism but of a life founded on autonomy and frugal conduct. • Find the freedom that comes from enjoying pleasures in moderation. Applying the epicurean example to our practice on the mat Despite its different origin, this list of epicurean principles seems to provide a quite clear strategy for achieving what the yama of aparigraha asks us. Still, I recall numerous conversations with friends and colleagues about Epicurus and Patañjali’s yoga philosophy that have ended up with mixed feelings of both enthusiasm and doubt, partly, I suppose, due to a strongly rising scepticism as to whether Epicurus’ theory has actually something to add to our understanding of our yoga practice. In other words, the question that arises is as to how can a modern yogi/yogini benefit from learning about epicurean philosophy and its notion about non-greediness and self-sufficiency other than being inspired to change some, if not most, of his/her negative daily habits and greedy behaviors. What I personally found from my practice, was that following Epicurus’ example can really help us practice the yama of aparigraha also on our mats. In doing so, we could: • Identify and always prioritize the fundamental elements of the practice, namely an undisturbed flow of breath and concentration, even in those days that we encounter difficulties physically and/or mentally due to pain, frustration or laziness. In other words, we should stick to what is really necessary and discover the serenity that comes from focusing only on the essentials. • Try to find the inner measure and “natural balance” that lies in the intelligence of the breath and act according to it rather than indulging in immoderate expectations that cause us nothing but anxiety and stress. • Be prudent by keeping our practice on the mat as “simple” as possible. Being “simple” requires that we always listen to our body’s different needs and limitations each day and enjoy the sense of autonomy and freedom that derives from setting and accepting our own boundaries. What I think these epicurean teachings finally point to is a way towards achieving the mental tranquility that Epicurus refers to with the term ataraxia which literally means the absence of mental disturbance and is often described as equanimity, as well as towards conquering what he calls aponia, a word used to express the absence of the pain of mental and physical need or want. These are, I believe, the virtues that we could look for behind Patanjali’s concept of non-greediness and diligently pursue both as individuals and as yoga practitioners. Also check this out astanga siva cakras and caturaṅga – what about the h
Facebook324Tweet0Pin0